This week David Guetta got his panties in a right bunch! Whereas Four Tet was in the studio making great tunes, Deetron was rocking crowds in Ibiza and Jimpster was busy working on his regular podcast to put out to his adoring fans – the DJs of the world were hard at work. Not David Guetta though. David wasn’t worrying about making music this week. When he wasn’t on the phone to his attorney in Paris arranging for them to chase after comedy writers, he was on Twitter venting his anger over our satirical article. The French seem to have left their sense of humour backstage in make-up.

Last week here at Wunderground, we posted another of our parody articles on popular DJs, this time joking that David Guetta had chorophobia, which is the irrational fear of dancing. People with chorophobia are afraid to dance, afraid of other people dancing, can’t bear to look at people dancing, and generally just want to be miles from anywhere dancing might take place. Believable much? We didn’t think so either.

The article was absurd from start to finish, and was obviously a parody, not based in reality. Even so, Goldilocks Guetta seemed to completely miss the point. He soon took to twitter…

Within hours we had heard from Guetta’s attorney in Paris, who issued us with a first summons and take-down request, claiming that the facts contained in the article “are totally non-existent and a pure lie.” No shit sherlock! Somebody better call Mr. Hanky and tell him there is no such thing as a Christmas poo. 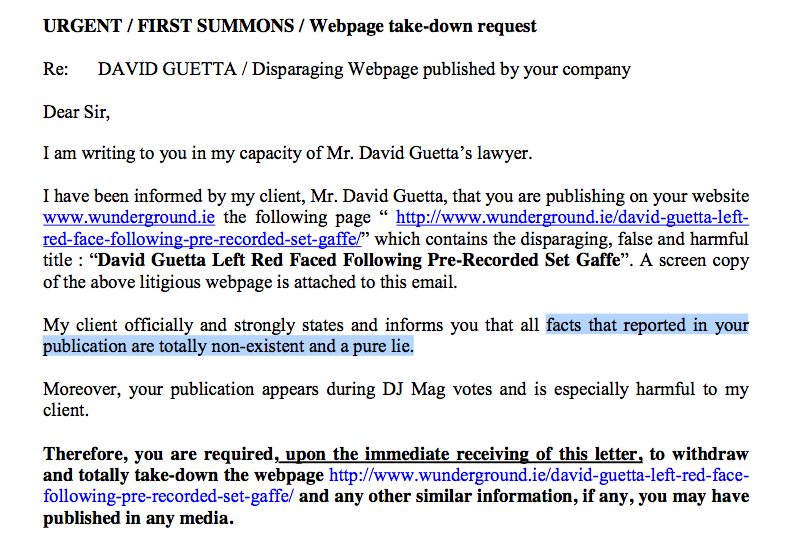 I have to say, I was quite flattered that our first cease and desist was from one of the world’s biggest current cheeseballs. Even so, we politely declined and refused to remove the article. And yes, I do normally know how to spell “letter”… 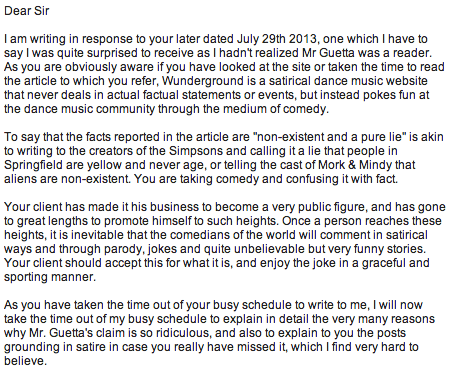 And so we wait with baited breath for his next move. David is in town this weekend for his Oxegen performance so we are hoping we get a knock on the door only to see the Frenchman come sailing into the office riding on Nicky Minaj’s back with a jousting stick in his hand screaming “Its on now le’muthfucka!”

He needs to Guetta life and we need to Guetta lawyer! We’ll keep you updated as this courtroom drama unfolds.