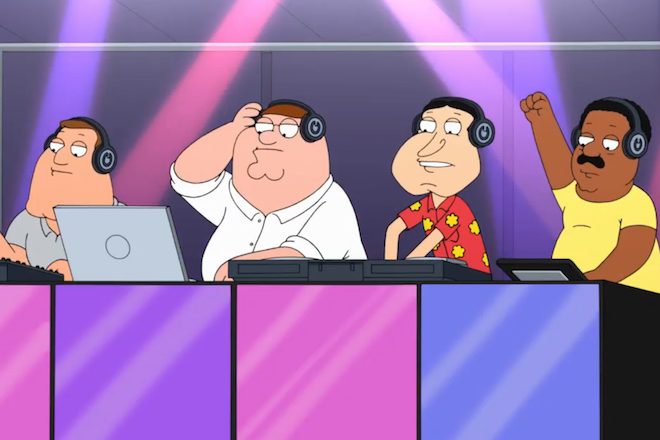 Following an extremely successful DJing debut on Family Guy last weekend, Quahog’s Premier track selector, Peter Griffin, has been invited to play the headline slot at the Ministry of Sound, London, this weekend.

Griffin, along with his Family Guy co-stars Joe, Quagmire and Cleveland, will take to the decks in The Box as part Amine Edge & Dance Present: Cuff this Saturday.

Since Griffin’s name was added to the lineup for this weekend’s show, ticket sales have reportedly reached “record level”. Wunderground spoke to Simon Parker, who bought his ticket for the event this morning, “I can’t fucking wait for this, I’ve not been this excited about a show since the Teenage Ninja Mutant Turtles on Ice back in the early ‘90s.”

“I’m not even into house music,” continued Mr Parker. “But I will have a Dance, I’m not exactly sure what an Amine Edge is either but, if it’s what I think it is and involves the edge of a bankcard, I’ll be having a few of those and all.”

Cuff residents Chicks Luv Us, also appearing at the Ministry of Sound this week, were quick to express their excitement to be sharing the stage with Griffin, “This is by far the highlight of our musical journey to date,” band member Anthony Fonseca told us. “We only really got into music to meet women, we never thought we’d actually get to meet some of our idols, yet here are, about to share the stage with Peter Griffin, some dreams do come true.”

Ministry of Sound employees have warned that this weekend’s show could be the club’s busiest ever night and are advising people to snap up their ticket while they’re still available or get down extra early to avoid disappointment.

Alternatively, Quagmire has revealed that he still has some places available on his guest list and is inviting females between the ages of eighteen and twenty one to apply for them by “sending nudes” to his Facebook page.