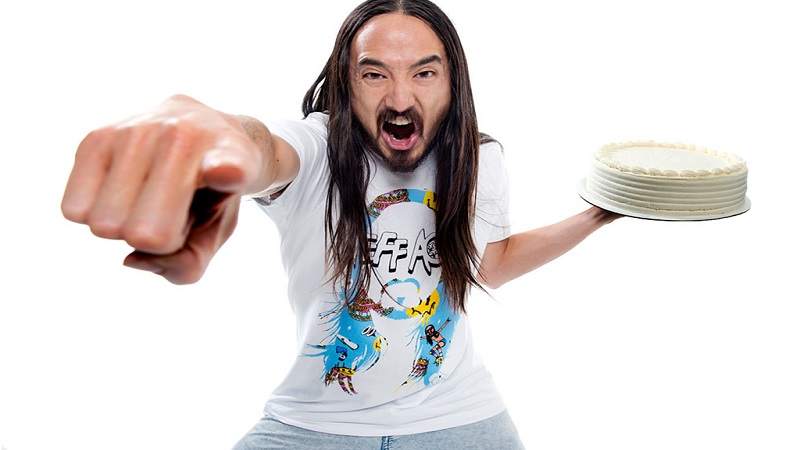 Track Of The Day: Karmon – Circus

Fans of US “DJ” Steve Aoki are in a state of shock after it emerged that Mr. Aoki is in fact a performance artist who has been engaged in a finely orchestrated and prolonged performance art piece that has encapsulated every aspect of his life.

The news emerged after it was revealed that Mr. Aoki has been awarded with a Special Achievement Award from the American Council of Performing Arts (A.C.P.A.) for the project which has taken up almost the entirety of Mr. Aoki’s adult life.

Speaking for the first time about the revelations, Mr. Aoki, pictured receiving his award from professional egoist, Kanye West, sought to explain the motivation behind the project.

“I wanted to explore the fickle nature of popular music fads by devising a public and onstage persona that could push the bounds of ridiculous behaviour to an extreme and still manage to get away with it.”

“For me it’s about trying to be as absurd and laughable as possible without any of the audience being aware of, or being willfully ignorant of, the sheer absurdity of what they’re witnessing. The EDM explosion for me was the perfect vehicle to explore that idea because it seemed like that audience were capable of mindlessly accepting the most crass gimmicks and personalities,” explained Aoki.

“The show and my life as “DJ” Steve Aoki has evolved over the years, ” he explained. “I’ve had to live every waking moment as this guy without ever breaking character. That’s always been the toughest part, seeing myself become this clown and never being able to say ‘Hey guys, it’s not real’.”

“I kept adding more and more unnecessary vulgarity to the show, bright flashing lights, topless performances, silly hair, Indian headdresses, trampolines. I kept thinking that at any moment people would realise that this was no longer dance music but that it was an absurdist pantomine and the game would be up. But no-one has ever even suspected.”

Spokesman for the A.C.P.A., Arnold Trumball, described his admiration for Aoki’s project, “It’s a tour-de-force in method acting. He’s been living as this consciously asinine DJ for the last 15 years without ever breaking character. Can you imagine living every waking moment as the DJ character Steve Aoki? Churning out shit track after shit track. Attending shit gig after shit gig?” questioned Trumball. “Not being able to hold your hands up to even your closest friends and admit ‘my career as a DJ is an absurd joke’. That’s real dedication to your art.”