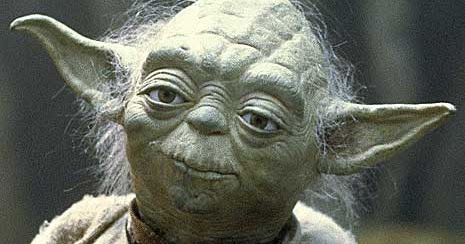 “Thou Shalt Not Play Tech House” To Become 11th Commandment

Star Wars favourite Yoda has shocked the entire Star Wars community by admitting that he has been an intergalactic ketamine addict for the last forty years.

According to the little green man, he started using ketamine shortly after the first Star Wars movie, A New Hope, was released in 1977 and has struggled with addiction ever since.

“Ah yes, strung out am I,” he told Wunderground earlier. “For many years, done Ketamine has Yoda. Forty years ago, a normal man Yoda was, six foot tall and normal colour skin had he. Then, one day, sniffed a fiesty one, did I. Forty years later, a green midget ketamine addict am I.”

Reports suggest that Star Wars writer and director George Lucas was aware of Yoda’s addiction but chose not to intervene as he felt it added depth to the character.

“Oh yeah, I knew about it from the very start,” Lucas told Wunderground. “Not a lot of people know this but Yoda was actually a guy from Nebraska named Vincent. He’s not even an alien, what you’re actually looking at is a man who has completely surrendered his mind and body to drugs.”

“Originally he was still quite tall, we used camera trickery and makeup to make him look small and green but he’s shrank at a rate of about one inch a year and gotten progressively greener,” continued Lucas. “He used to be able to talk properly too but now he muddles his words up all of the time. If he wasn’t such a good character, it would be tragic, but hey ho, that’s Hollywood.”

Man Uses Lockdown To Finally Get To Know His Kids

“Eventually, if he keeps using ketamine, I believe he’ll turn into a pea, which would actually work really well for another movie I’ve been writing, Star Peas, it’s set in the same Universe as Star Wars but way into the future after a rogue band of vegetable farmers brought peace to the Galaxy,” revealed the director. “Plus, I pay him in ketamine so by the time he’s a pea I’ll literally only have to give him about one gram every year, that’s cheap, even for washed up actors from the 70s.”

According to movie insiders, the original Star Wars cast was plagued with illness and addiction, including Chewbacca, who was suffering with a rare strain of throat cancer, all of the Ewoks, who were addicted to Brylcreem and Luke Skywalker who recently lost a hand to loom bands.