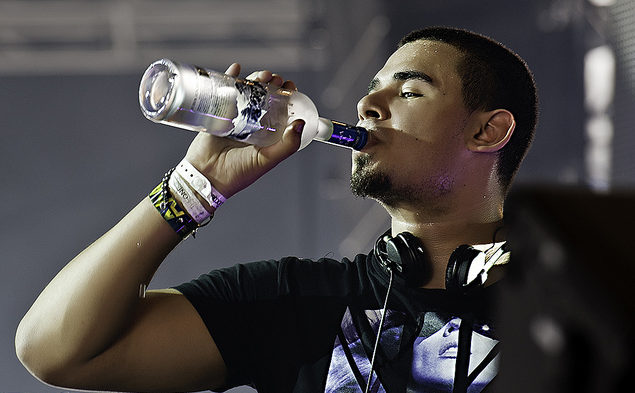 A recent survey carried out by a cheap club promoter has found that one in four DJs can’t tell the difference between Grey Goose and Smirnoff vodka.

The survey, conducted in Birmingham’s eighth biggest techno club night, Techno-lodge, proves that image is more important than taste when it comes to vodka selection.

“These DJs haven’t got a fucking clue mate,” claimed promoter Steve Jenkins. “They’re looking to be paid ‘X’ amount, plus, plus, plus and then they expect you to give them as much Grey Goose vodka as they, and their crew of muppets, can drink. Bollox, not on my watch, I’ve got one bottle of Grey Goose and it’s empty.”

“Every time one of these dicks asks for it I fill my empty up with some Smirnoff, or cheaper, using a funnel. We don’t even stock the shit because no cunt in their right mind would pay for it in this shit hole,” continued Jenkins. “Yet, they still expect us to get it in especially for them. Well fuck that, they’re already overpaid, if they want expensive vodka they can pay for the fucking stuff themselves.”

“Every so often some cunt will realise and I’ll make up some excuse about suppliers or some shit like that,” explained the promoter. “They’ll get a bit stroppy and threaten to walk out but once you stick a bump of kezza up their snout they’ll just get on with it, two or three drinks in and they won’t even remember about it happening, they’re all prima donnas mate, you just got to know how to handle them.”

According to rumours, the price of Grey Goose vodka is directly related to the DJ who requests it on their riders IQ.