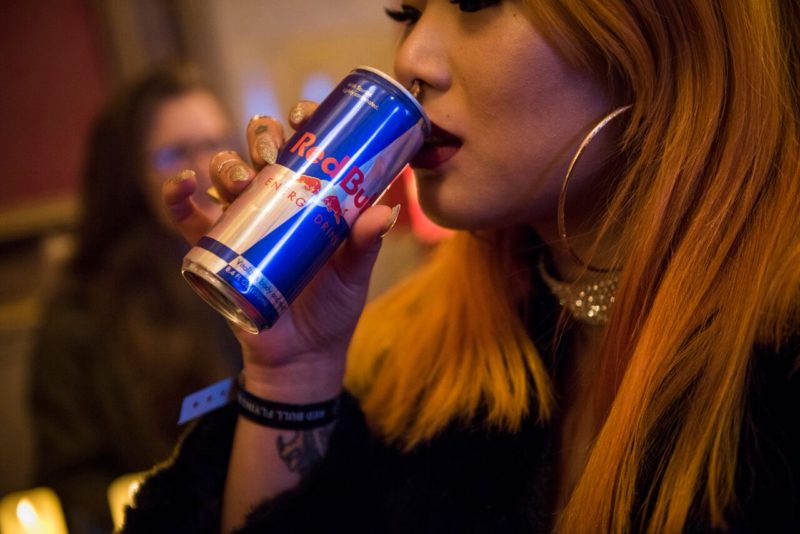 A girl who hasn’t had a drink in over three years has claimed that alcohol is “fucking disgusting” while sipping on her sixth Red Bull.

Vicki Mitchell, a twenty-six-year-old Solpadeine addict from Dublin, Ireland, made the audacious claims during a night out with her “girlos”.

“I used to love a good old drink myself so I’d never judge anyone for going out and having a few drinks and enjoying themselves,” Vicki explained in the smoking area where she’s just nipped out to for a quick spliff. “It’s just that it’s fucking disgusting and turns people into horrible cunts. That’s why I gave it up, not because I had a problem, no matter what anyone tells you.”

“Now, when I’m out with my girlos, I stick to the Red Bulls,” she continued. “I’ll just sip on six or seven of these over the course of a night out. It’s lovely but it plays havoc with the aul bowles, I’ll be shitting through the eye of a needle for a couple of hours in the morning but at least I won’t be hungover.”

“I don’t know how I used to stay out drinking until three or four in the morning without it, I get so much energy of it I do be up the walls. That’s why I have to balance it out with the bit of weed. Takes the edge off, you know? Then, to stop myself from getting too stoned, I’ll have a couple of bumps of charlie, I’m the designated driver like, so I need it to keep myself alert.”

“You’ll defo never see me drinking alcohol again though, filthy stuff it is,” claimed Vicki. “Plus, it gives me a chance to look down my nose at all my friends and tell them all about how they made a holy show of themselves the next morning.”

According to Miss Mitchell’s friends, the non drinker is now only invited out on nights out as means to get home, “Who does she think she is standing there telling us we’re manky for having a drink when she’s getting off her rotten little tits on all sorts of shite, the fuckin’ bitch.”

“The only reason we still invite her is because it costs a bleedin’ fortune to get back to Tallaght in a taxi. I hope the stuck up cunt chokes on her Red Bull the next time.”