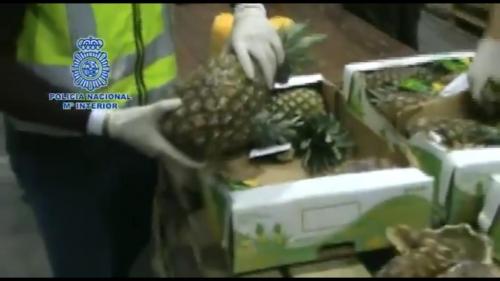 Customs officers in Spain have reportedly found over 700 pineapples stashed inside hallowed out blocks of cocaine.

The bust was made as part of “Operation Del Monte” in an attempt to curtail the country’s booming illegal fruit trade.

Wunderground spoke to Juan Cabellos of the Policia Nacional, “This is a huge result for the Spanish authorities in the war on fruit,” he told us. “Powerful South American crime cartels have been smuggling unregulated fruit into Spain for years, today’s find has dealt them a major blow.”

Policia Nacional officers intercepted the illegal shipment forty kilometers north of Barcelona, where it is believed the pineapples would have had a street value of upwards of €10K.

“These were extremely pure pineapples,” Anna Torres, a local fruit expert, told us. “They would have been distributed around the city, mixed with low quality pineapple juice and sold on the street in chunks and rings. There’s no saying how many lives this fruit could have ruined if it had reached its destination.”

Reports suggest that local fruit addicts have been forced to turn to local shops, supermarkets and fruit mongers to get their regular fix.

“I’ve just come out of Mercadona and the place is absolutely choc-a-bloc with fruities,” revealed expat Simon Dyson. “I’ve not seen anything like it since I lived in the UK, it were a bit like Greggs on giro day, only a lot healthier.”

Spanish authorities are advising people that they could be about to face the “biggest fresh pineapple shortage since records began” and asking people to turn to “dried or canned pineapple as an alternative”.