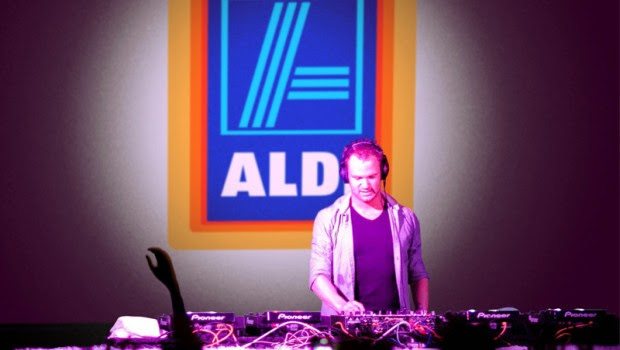 Gerd Schnieder, an Aldi spokesperson, told us about their upcoming assault on the EDM industry at the label’s official launch party in Berlin last night, “This is a project we have been considering here at Aldi for a very long time. We always felt that we would need a collaborator from within the industry for this enterprise to work and we are now honoured to announce our partnership with Dash Berlin.”

“Someone with such high prestige in the EDM community and such low morals in life was exactly what we were looking for to help move this project forward,” he added astutely.

“Naturally, as Germans, we’re entering the electronic music industry full of confidence. We believe that by following the Aldi blueprint of mass producing an inferior product, which we’ll obviously sell at a slightly reduced price, we’ll really be able to capitalise on the economic viability of the EDM industry,” he explained.

“We’ll be opening a production center in China, where we’ll employ hundreds of Chinese teenagers to make formulated EDM tracks which will later be repackaged as ‘the next big hit’ for artists like Dash Berlin. David Guetta and Calvin Harris have been doing it for year and it’s worked out well for them,” he commented.

Aldi have also confirmed plans for their brand new state-of-the-art shopping cart, which is to be called ‘Trolley 2.0’. Mr. Schnieder continued, “Trolly 2.0 is really going to revolutionise the shopping experience for the EDM fan. In the center of the handlebar there will be an eight inch digital, touchscreen interface. This will allow shoppers to check out our latest releases and get news on special offers while they are shopping in our stores.”

“You will be able to listen to tracks as you walk around, allowing you to decide whether or not you want to buy them before you reach the check-out. Once the tracks have been purchased you’ll be able to download the high quality WAV files straight from your cart onto any portable USB device,” stated Mr. Schnieder.

Dash Berlin, real name Jeffrey Sutorius, also commented, “I’m absolutely delighted to be involved in this project from such an early stage. I’ve been clinging from the coattails of Germany and its music scene my whole career, hence the name Dash Berlin,” he explained.

“It’s not that I don’t like the Dutch scene,” insisted Dash. “But the German scene has always seemed a little more respectable to me. That’s why I’ve been telling people I’m German and putting on an accent for the last ten years. I even own a couple of pairs of lederhosen,” he joked.

“Hopefully now, by being associated with something as emblematically German as Aldi, I won’t have to make such an effort to fool people anymore,” he optimistically continued.

Although it is unclear how much Dash Berlin has been paid to become the face of Aldi Recordings, sources close to the Dutch producer have revealed that he is “extremely excited” by the prospect of qualifying for the Aldi staff discount, a luxury which could save the frugal shopper up to twenty euros a week.