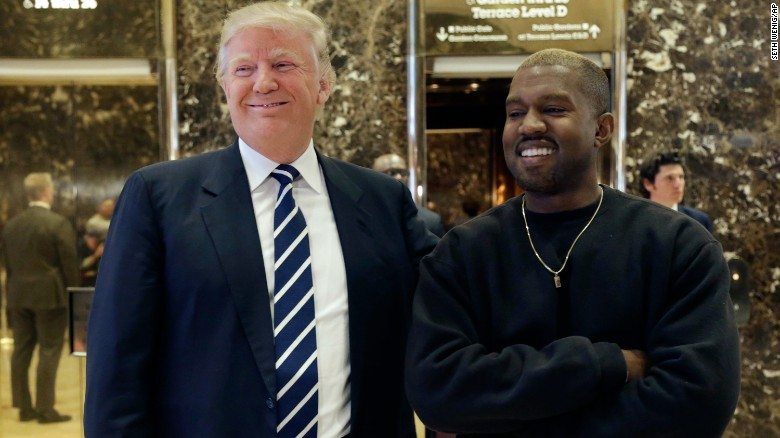 In a bid to make himself look like less of a cretinous racist, U.S. President elect Donald Trump has found a black man, Kanye West, who he believes is rich and obnoxious enough to be his friend.

While it is not yet clear how genuine the relationship is, it has been confirmed that the unlikely duo will participate in a number of bonding sessions over the coming weeks.

Wunderground spoke to Steve Madison, a member of Trump’s PR team, to get the lowdown on the latest developments, “This is a really big step for Donny (Trump),” explained Madison. “He’s never really been friends with any black guys before, mostly because he thought he could ‘catch black’ of them but after filling him in on genetics and the science behind skin pigment we convinced him that that wouldn’t be happening.”

“We’ve arranged for Donny and Kanye to go on a number of play dates in the next three or four months,” revealed Madison. “They’ll just be doing normal things that rich, obnoxious douche bags like to do, like violating human rights, oppressing the poor and making money of other people’s misery so we’re confident that, by putting them in the right environment, their friendship will really blossom.”

“We’re looking to get rid of some of the preconceptions that people may have had about the President elect and this is the first of many steps towards proving that he is a worthy and progressive modern world leader,” continued Madison. “Another couple of hundred thousand steps in the same direction and I think people will start to see him in a different light.”

“It’s great to see that Donny wants to change his image light and is willing to make sacrifices to make it happen,” said Madison. “Who knows? Maybe someday he’ll even talk to a Mexican on a human level or show some respect towards women.”

Rumours that the pair’s friendship had hit a snag after Kanye claimed to be the “greatest President of all time” have been rubbished after the couple were seen “holding hands and laughing at homeless people” in New York early this morning.