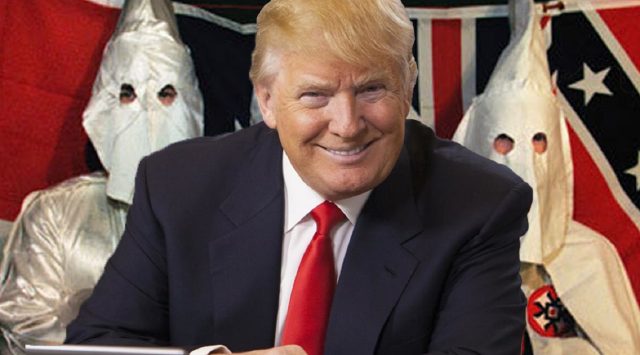 American presidential candidate Donald Trump has announced plans to host a white supremacist rave, which will be called The White House, later this year.

The White House will take place in Birmingham, Alabama, and will be an extremely exclusive event with invites being distributed throughout KKK chapters, Neo-Nazi groups, white supremacist gangs and corporate boardrooms.

According to Trump, the rave will be “some good old fashioned, white fun” and warned that anyone who isn’t a “white, conservative, right wing christian” will have no chance of getting in.

“I really don’t know why people think I’m racist,” claimed Trump. “I’m not one bit racist, I just happen to love my country and the foundations upon which it was built, which just happen to be the slaughter of millions of natives and slavery, that’s not racism, it’s national pride.”

“There’s nothing racist about this event at all, sure there’ll be no blacks, Mexicans, Muslims, Asians or Jews at it but that’s not about race, it’s about exclusivity, I’m sure those guys get their own parties in prison all the time,” continued Trump. “Besides, none of those kinds of people are into EDM anyway, it’s definitely more of a white thing.”

“The rave will have a military theme and we’ll be hanging confederate flags and swastikas all over the place,” revealed Trump. “It’ll be great, we’re even having a reenactment of the Wounded Knee Massacre where over two hundred and fifty Native Americans men, women and children were killed by the brave American soldiers. We’ll be encouraging people to bring their own guns for the reenactment and to deal with any outsiders who try to get in.”

Headliners for The White House include Ten Walls, Jay Styles and an exclusive DJ set by Azealia Banks.