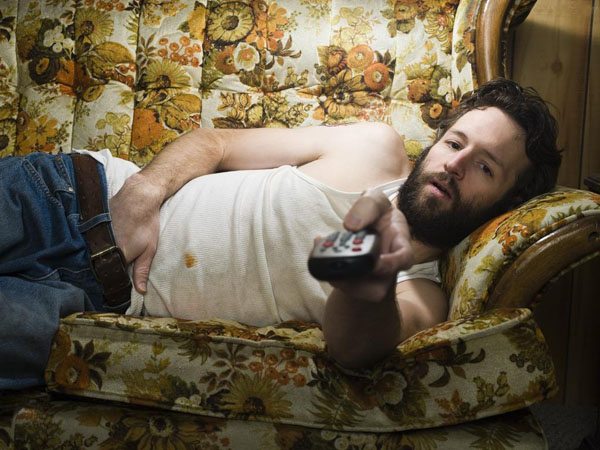 Twenty eighty year old car salesmen Mark Dickson has admitted to actually enjoying the experience of an unexpected break up with his girlfriend and not the soap opera bullshit of self-despair and pity that he was expecting.

Newly single Mark, a self proclaimed lady killer, has been free of any commitment for over a month now, “It’s great. I’ve taken up smoking again, bought a PlayStation and I can’t remember when I last cooked,” Mark told us while scratching his festering bollocks through kebab stained MMA shorts.

He continued to explain that it is actually “proper wicked” that she stopped talking to him after being together for eight years, recently moving in together and buying a dog, with no explanation.

According to friends of Mr Dickson, Mark will run out of money and be forced back into the workforce in approximately one week.

Neighbour, and local know it all, Wayne Smith told us that Mark is pretending to be coping with getting dumped by beautiful doctor Kat Miller; but is actually about as happy as a feminist on holiday in Saudi Arabia.

“He looks like he has put on about two stone, smells like a fucking World War II trench and keeps waking me up squealing like a pig at a slaughterhouse. He need to get himself out on the tiles in Coventry with his mates and find himself a new misses before his excessive wanking does lasting damage to his tackle.”

So far Kat has been unable to comment but is believed to have grown up and realised there is much more to life than shit sex, the “cheap” car finance he ripped her off with ten years ago and occasional dates at Nandos with sides of extra Haloumi.