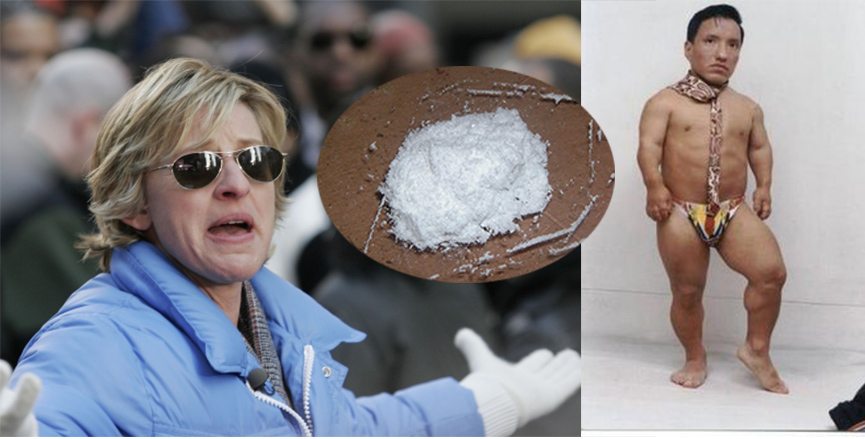 Just hours after receiving the Medal of Freedom, the highest civilain honour awarded by the White House, Ellen DeGeneres was caught sniffing ketamine of a dwarf’s erect penis in the bathroom of a Washington DC nightclub.

Witnesses claim that Ellen looked “disheveled, shocked and wobbly as fuck” after being interrupted by the club’s security and ejected from the premises.

“It was crazy, we were just chilling in the club when all of this commotion started going on in bathrooms,” claimed twenty three year old Monica DiCampo, “We saw some blonde lady getting dragged out kicking and screaming followed by a dwarf guy with his trousers around his ankles, at first we thought she must have been blowing him but then we noticed it was Ellen so they must have been doing drugs, he was probably hiding some crack up his ass hole.”

According to Mike Styles, the club’s chief of security, DeGeneres was caught halfway through sniffing a “large line of the little guys dick”.

“I’m sick of these celebrities swanning around acting like they’re above the law,” scoffed Styles. “Well it doesn’t work in my club, let me tell you that. When you’re within these walls, you play by my rules or you’re out on your ass. I don’t care who the fuck you are or what they fuck you do, the rules are the same for everyone.”

Nightclub hostess Angelica Whelan also spoke to Wunderground, “I’m a huge Ellen fan and I just couldn’t believe what I was seeing, she had a weird vacant look in her eyes and I’m pretty sure she was drooling while trying to explain that she was just doing some research for a segment on here show but she must have been lying because there’s no way they’d do a piece about drugs and dwarf penises on daytime TV.”

“Even more shocking was the size of the dwarf’s junk,” revealed a blushing Whelan. “I always assumed they’d be in proportion but not this guy, let’s just say Ellen must have done a much bigger than average line. I slipped him my number on his way out the door, we’re going for coffee on Friday afternoon.”

According to sources close to DeGeneres, Ellen often hires dwarfs to take on night’s out because she is unwilling to sniff drugs of “unhygienic areas” in public bathrooms and claims “dwarf erections are the perfect surface for nailing ket”.