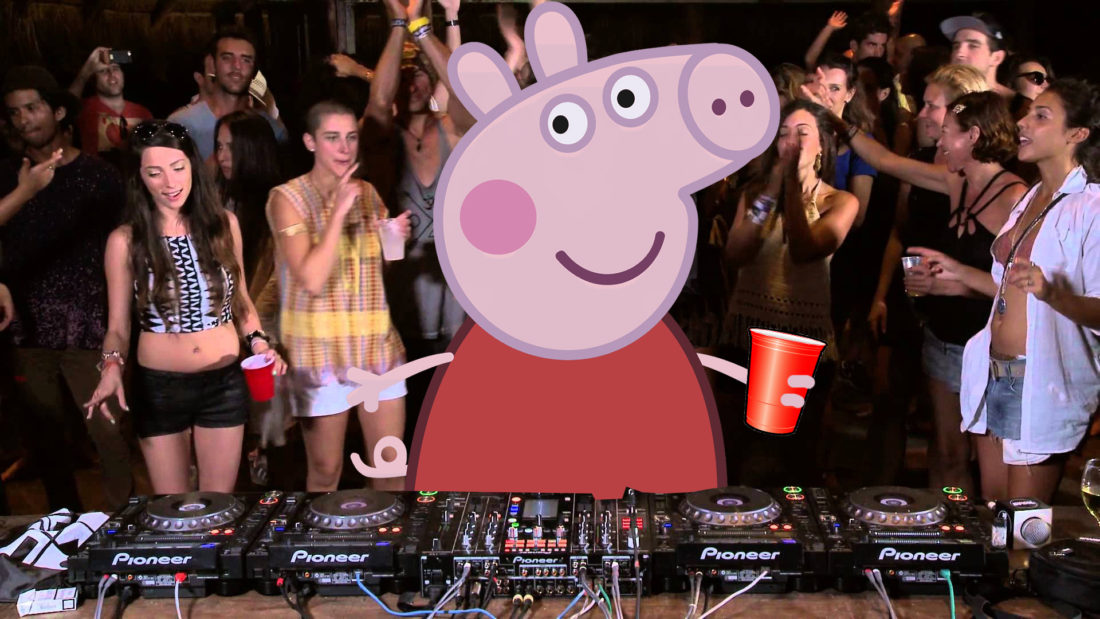 According to Wunderground sources, the ridiculously annoying children’s cartoon character Peppa Pig is set to make her Boiler Room debut before the end of the year.

The news categorically confirms that Boiler Room has joined the likes of Ibiza, pills and Maltesers on a list of things that aren’t what they used to be.

“It was bound to happen eventually,” claimed “former diehard” Boiler Room fan Spencer Thomas. “The quality of acts they’ve had on there has been going downhill pretty steadily over the last few years. Don’t get me wrong, they still have some quality artists, they’re just becoming less frequent and sandwiched in between a load of schmucks who’ve paid for the privilege.”

“I thought they reached an all time low when they brought Thom Yorke on,” continued Thomas, “Then they went and got that cock faced prick Anklepants on, what the fuck was that all about? And then, Just when you think they can’t stoop any lower, they invite Skrillex to do one, I haven’t listened to a Boiler Room since.”

“Now it’s Peppa Pig, I have to listen to enough of that posh little twat when my brother’s around the house with his kids, the last thing I want to hear at an after party is the cunt play a pissy DJ set,” ranted Thomas. “It’s a joke, granted the set will probably be better than a lot of the other new Boiler Rooms but it’s just not right, they may as well get Steve poxy Aoki to do one.”

According to Boiler Room’s head of marketing, Andy Baldwin, Ms Pig’s appearance is a move to target the future generation of Boiler Room fans while they are still toddlers.

“The streaming game is fiercely competitive at the moment,” confirmed Baldwin. “So in order to ensure Boiler Room’s future we’re targeting the next generation of music fan’s, Peppa Pig is going to be the first of many cartoon characters to play sets for us, check it out, we think you’ll be pretty pleasantly surprised.”

In related news, rumours that Peppa Pig and Dan Duncan, of Pig and Dan, are having an affair have been circulating on social media after the pair were spotted looking comfortable together in a Paris cafe last weekend, more on this as we get it.