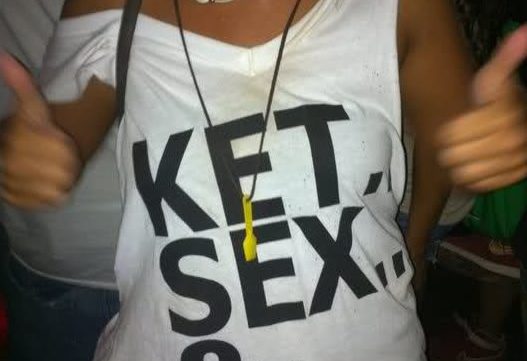 A girl who keeps a small spoon on her necklace, commonly known as a “ket-spoon” amongst the modern day ket-abusing raver, has found herself in hot water with her parents, after they confronted her over what she actually uses it for.

Twenty two year old Sarah Vickers, who thinks it’s “cool” to sport a drug utensil publicly, is said to have been “put right on the fucking spot” by little old nan, following a host of questions about her choice of “obscure” jewellery, over Sunday brunch with the family.

“I’d been to a rave and not slept, so being quizzed over my spoon was the last thing I needed,” Sarah told us. “My nan was waffling on about how women wore pearls back in her day and that a spoon made me look stupid and like a common whore. Obviously this prompted my mum to ask what it’s for and, being completely fucking brain dead at the time, I told her to eat cereal and yogurts. They didn’t believe me so I ended up having to prove it. I had to sit there and eat an entire bowl of Cocopops with this silly little fucking spoon, which I had been shoveling ket up my hooter with all night. It took me over two hours.”

Wunderground spoke with Sarah’s mum, Julie, about her thoughts on the spoon necklace, “Her dad hates it, but I think it’s really quirky,” she gleefully told us. “My Sarah has her own unique style so I’m not surprised she has a spoon around her neck. No doubt she will wear a bracelet with a fork on it next week, which will be both stylish and convenient if she is eating out. I may even surprise her and get myself an anklet with a full set of mini cutlery on it or a toe ring with a spatula attached to it, just to show her I can be stylish and trendy too.”