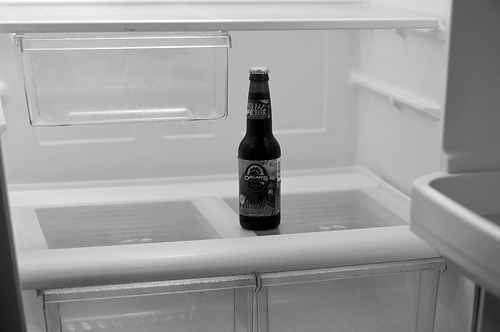 The last bottle of beer at an English house party has reportedly sold on eBay for the princely sum of £2.6million.

The bottle, a lukewarm Galahad, is believed to have been bought by an anonymous bidder in one of the house’s upstairs rooms.

Matthew Richardson, the occupant of the house and default bottle-owner, claims that he is delighted with the sale of the can and believes it will help soften the blow of having no beer until the offies open in three hours time.

“It’s great mate, I never imagined it would go for so much money,” Matthew told us earlier. “I was hoping to get a fiver for it, maybe seven quid at best, but once the bidding war started it just kept going up and up. I was thinking, it must have been some rich Saudi investor that bought it or something but then I remembered there’s none of them in the house, it must be one of my mates.”

“I’ll probably take some of the money and head down the pub when it opens in a few hours,” he continued. “Somebody smashed the bloody mirror in the hall too, so I’ll have to get that fixed before my parents come back from their holidays but, apart from that, I’m not really sure what I’ll do with the money. I definitely won’t let it change me though.”

According to reports, Matthew currently has a list “longer than his arm” which will be sent to his local drug dealer as soon as he starts answering his phone.

“Things are going to get a bit crazy in here later on,” confirmed Stevie, a close friend of Matthew. “Matty’s been pretty sound and agreed to get drugs for everyone. We were making a list but I think we’ll prob just get everything he has, that should do us for a little while at least. His parents aren’t home for another week so we’ll probably have a good chunk of that £2.6mil spent before they get back.”

Unconfirmed rumours suggest that the beer in question was opened, had one sip taken from it and is now sitting unattended on the kitchen table, along with around thirty other almost full bottles.