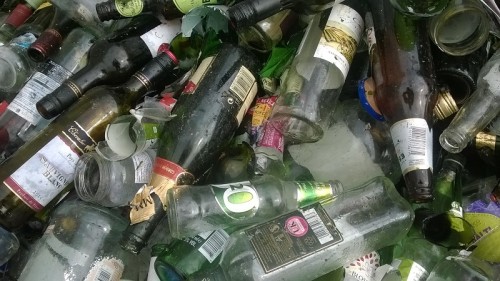 An Irishman’s back garden is now almost entirely made up of empty beer bottles.

Paddy Delaney, a thirty one year old construction worker from Dublin, has been collecting the empty vessels in his garden since he moved into his current home in 2012.

Sources close to Delaney have confirmed that the bottle collection started due to laziness but has since become the thirty one year old’s passion.

“Paddy’s very serious about those beer bottles,” explained Nigel, one of Delaney’s regular drinking buddies. “At first, he was going on about how he was gonna bring them to the recycling center but after about the first two or three years that changed and he became very possessive and proud of the collection.”

“I don’t know why, because they’re fucking horrible, there’s an awful bang of piss of them and it’s a serious breeding ground for wasps out there during the summer,” continued Nigel, who believes he has probably contributed somewhere in the region of ten percent of the bottles in the garden.

“One of the neighbours even threatened to come over the wall and have the bottles removed when he wasn’t here but Paddy told him out straight that he’d kill him if he touched any of his bottles, and I believe him too.”

According to Delaney, the pros of having a back garden made entirely out of beer bottles far out weight the cons.

“I can honestly say that I wouldn’t want my back garden any other way,” he told Wunderground this morning. “Sure, it might be a bit mankey but think about it, there’s zero maintenance, no one ever wants to come around to visit unless you’re drinking and there’s absolutely no chance of burglars getting in through the back.”

“I haven’t had to cut the grass or do a bottle run in six years, it’s fucking amazing. I’m gonna keep going until I can’t fit any more bottles out there, and then I’ll move to a house with a bigger back garden.”