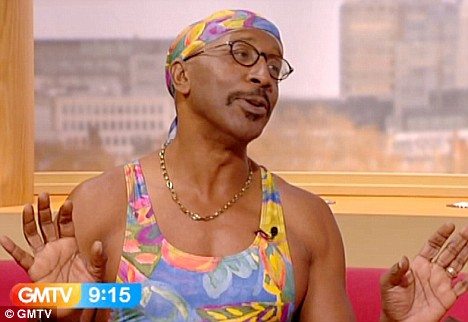 Carpet Factory Destroyed In The War On Rugs

Mr Motivator, real name Derrick Errol Evans, made the shocking admission during an interview with Philip Schofield on an episode of This Morning earlier today.

Wunderground spoke to Evans, “It feels really great to have finally come clean about my addiction,” he told us. “I felt extremely comfortable talking to Philip, he admitted that he used to be a crack head on the show a couple of years ago. I could tell that he knew exactly what I’ve been through and, afterwards, we went down to the toilets and bombed a couple of speed balls, it was brilliant.”

“Now that everything’s out in the open, I can finally get on with my life,” he said with a sense of relief. “I don’t want to quit the speed, I fucking love that stuff, I just want to quit this stupid Mr Motivator character, he annoys me so fucking much, it’s time to go back to being Derrick again.”

“Honestly, I was never even into fitness or anything,” he admitted. “I was just a young man, slowly getting fat and suffering from a complete lack of motivation. That’s when I turned to speed. It totally motivated me, mostly just to go out and get more of it. I needed to come up with an excuse for all of my newfound energy. That’s when I came up with the idea of Mr Motivator.”

“It started off as a bit of a joke, I tried on someone’s bird’s spandex at a party and it just spiralled out of control from there,” revealed Evans. “It was an easy way for me to make enough money to pay for my addiction. I never wanted it to get this out of hand but it has and I’m really sorry to each and every person who has been offended, hurt or annoyed by the Mr Motivator character, I’m quitting it now and I promise, from here on in, I’ll just be a regular drug addict.”

In related news, Linford Christy is believed to be considering taking over from Mr Motivator as daytime TV’s annoying fitness bloke, claiming the “nation’s women deserve to see a spandex covered penis with their breakfast every morning”.