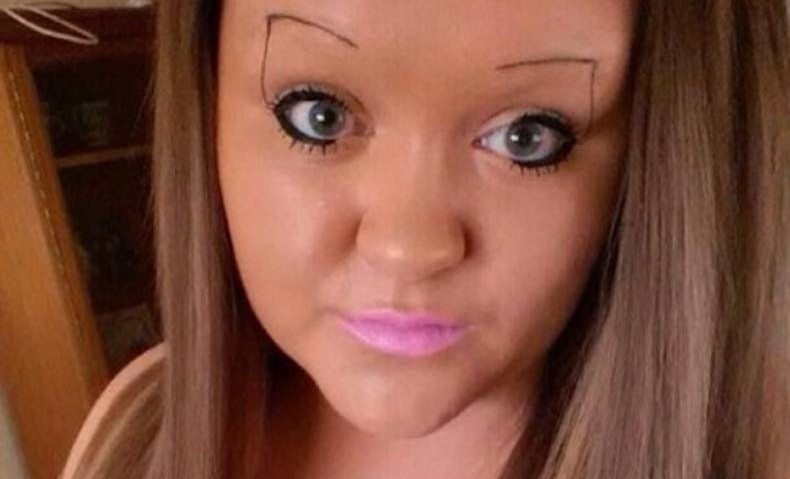 An Irish party girl is having a “total fucking conniption” this morning after waking up and forgetting whereabouts on her head her eyebrows were supposed to be.

Jess Harris, a 19-year-old beauty therapist who considers talking about make up and watching bad romcoms to be fun and thinks that videos of pugs on Youtube is the pinnacle of human achievement, is believed to be in meltdown after a number of failed attempts at applying her eyebrows ahead of a “massive weekend with the girlos”.

“I haven’t had a proper eyebrow since a singeing accident with a hair curler took the edges off them back in 2013,” explained Jess, somehow managing to use text speak with her actual voice. “So I draw them on every night with red marker pen before I go to bed in some random dudes gaff.”

“Unfortunately the DJ whose dick I was using as a lozenge last night didn’t have anything to mark where my eyebrows were supposed to go,” continued Jess. “I woke up this morning and walked home and all the dopes on the street were staring at me like I had two heads or my gash out. I hadn’t got a clue what the fuck they were looking at.”

Jess revealed that it was only upon arriving home that she realised she had made the walk of shame, or in her case just the walk, with absolutely no eyebrows at all.

“I must have left them on what’s his names pillow,” she presumed. “They’ve been all over my head over the years, in varying arches and thicknesses, like having a smirking Burt Reynolds lip bush planted above each eye but I’ve never let them disappear altogether and now I don’t even know where it is they should be.”

According to friends of Ms. Harris, the party girl eventually managed to get reapply her eyebrows after she calmed down by having a bump of K, eating a spice bag and downing a cheeky naggin.