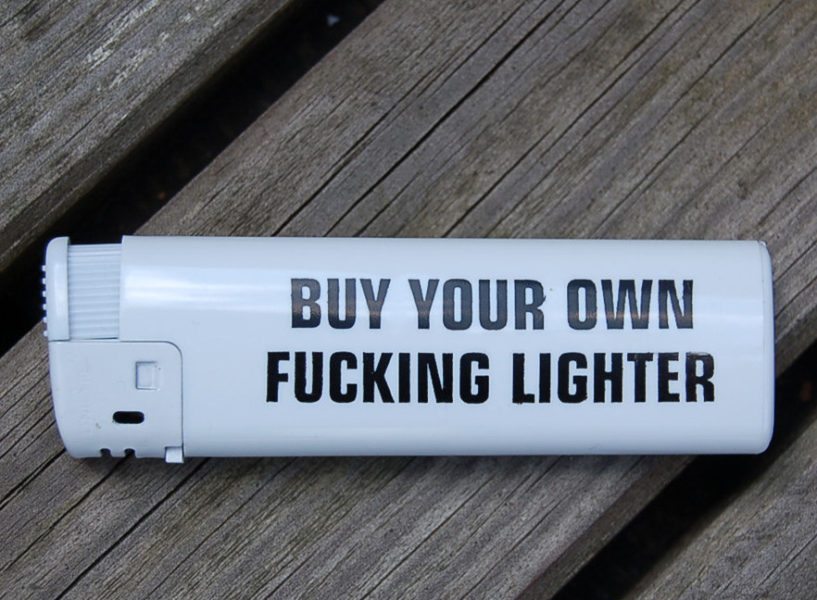 Serial lighter thief Stuart Miller was about to board an airplane to Beijing International Airport, China, where normal American cigarette lighters can demand fees of anything up to one thousand dollars due to their supposed mystical healing powers, when plain clothed officers swooped in the early morning bust.

Miller now faces the death penalty as authorities look to crack down on the rising epidemic of lighter thefts currently sweeping the nation’s parties – with thefts being reported at everything from raves to dinner parties with some even believed to have been stolen when only two people sharing a spliff were present.

Sgt. Butch Rightwing of the USCBP spoke to Wunderground earlier, “We’ve been running surveillance on Miller for quite a while now, he’s an extremely accomplished and very ruthless lighter thief. Often Miller will steal your lighter in such a quiet way that you’ll only notice hours later while waiting on the bus home.”

“He’s been working the party and clubbing scenes here in Austin for about the last eighteen months,” divulged Sgt. Rightwing, who looks more like a contestant on popular weight loss TV show The Biggest Loser than an officer of the law. “He preys on people who’ve had their senses numbed by drugs and alcohol by asking them for a light, making some mundane small talk, calmly slipping their lighter into his pocket and casually walking off.”

“It’s a simple yet effective technique that takes nothing but big balls,” claimed Sgt. Rightwing who warned everyone in possession of a lighter to be extra vigilant at social functions where lighters are being shared because people like Miller will callously steal any lighter, even if it’s a Zippo that your Granddad gave you before he died. “He doesn’t care whose lighter he’s stealing as long as he gets paid and believe me it’s quite a lucrative trade. The lighters are sent off to China where the locals think that they possess magical properties like Gandalf, iPhones or 2CI.”

“Chinese apothecaries grind them up and put them in tea, they think it makes you fuck like a stallion and they’re willing to pay top yen for them,” he added.

Mr. Miller is denying all counts of lighter theft claiming that he “didn’t mean to steal the lighters” and that they “just seem to end up in his pocket” every time he goes to any form of social function where people are smoking or lighting candles.