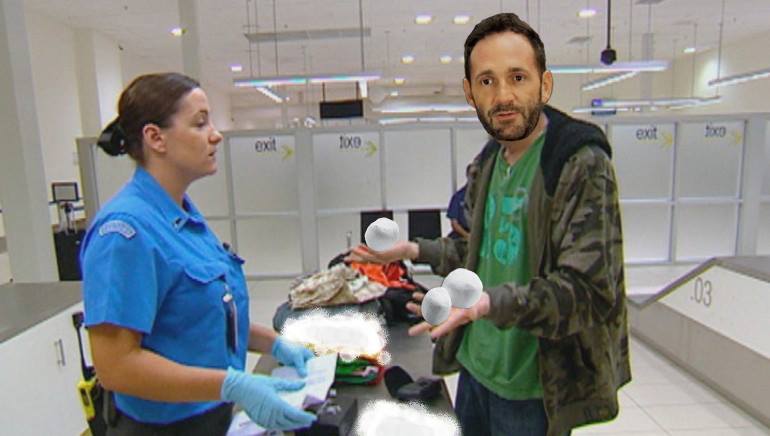 British house music legend Steve Lawler is reportedly being held at a French airport after being caught in possession of “two kilograms of snow”.

Suspicions at the airport are believed to have been aroused after customs officers noticed a “large trail of meltwater” from the airplane’s overhead luggage compartment to the DJ’s bag at passport control.

“Every incident that happens in an airport has to be taken extremely seriously,” claimed customs officer Jean Claude Cuttero. “We have no idea how he managed to get the snow onto the airplane but there was no way we were going to let him onto French soil with it.”

According to sources close to Lawler, the DJ is said to be “buzzing off his tits” in anticipation for next year’s Snowboxx Festival but is worried that global warming may cause the festival to be cancelled.

“Steve hasn’t shut up about Snowboxx since he was asked to play at it,” claimed a friend of the DJ. “He loves snow, snowball fights, snowmen, snow angels, tobogganing and pretty much anything snow related so he’s really excited about the festival and he doesn’t want to let anything spoil it for him.”

“He watched that Al Gore documentary, An Inconvenient Truth, a few weeks ago and ever since he’s been convinced that there’ll be no snow for the festival,” continued our source. “He’s going totally fucking mad with worry, he’s stopped using deodorant because he thinks aerosols are what’s doing the damage and he’s also invested about £200K in a company that are trying to develop an exhaust pipe for cows’ arses that will reduce methane levels in the atmosphere.”

“Now he’s decided to start personally importing Arctic snow into France to make sure there’ll be enough of it there in March. Honestly, I think he’s finally lost it but at least it’s distracted him from drawing cocks on everything.”

If you would like to join Steve Lawler for a snowball fight at Snowboxx Festival between 17 – 28 March 2018, check out all the details here.