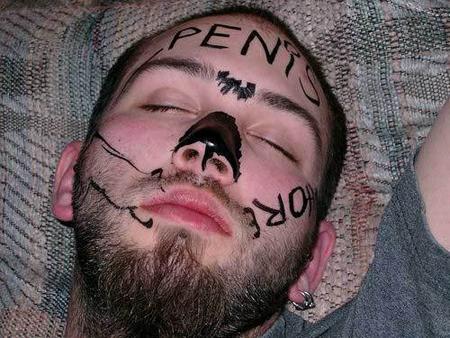 A brand new Banksy piece has mysteriously appeared on a man’s face after he fell asleep at a house party.

The man, who has asked to remain anonymous, claims the unexpected work of art on his face is easily the best thing that has ever happened to him.

“I’m always bloody falling asleep at house parties and usually I wake up to something horrible, like shaved eyebrows or a yoghurt poured over me, my friends are obviously cunts,” he told us. “I never once thought I’d wake up to something as amazing as a Banksy piece on my face. It’s fucking awesome.”

“It’s mad to think that he managed to get into the house, draw this masterpiece on my face, and then fuck off, without me waking up or anyone else in the house even spotting him,” continued the man. “He truly is a master craftsman, stealthy as the Scarlet Pimpernel, with the creative craft of Leonardo Di Vinci.”

“I’m so honoured he chose my face as his latest canvas,” he said beaming with a smile. “It’s just amazing to finally feel like my life is actually worth something, and to think, all of my teacher in school told me I’d never amount to anything. Well, where are your Banksies? Because I’ve got one on my face.”

According to sources within Christie’s Auction House, the facial artwork could be worth anywhere up to £2.5 Million. However, it would need to be removed from the man’s face to be sold.

“It’s another stroke of genius by Banksy,” claimed some arty bloke. “Eventually, that lad will have to wash his face and the art will literally be washed down the drain. If he wants to sell it, he’ll have to have it surgically removed. It’ll most likely just get washed away, like all of his dreams.”

The man has claimed he will happily undergo disfiguring surgery to have the artwork removed for his face, as he will be far too rich afterwards to worry about scars.