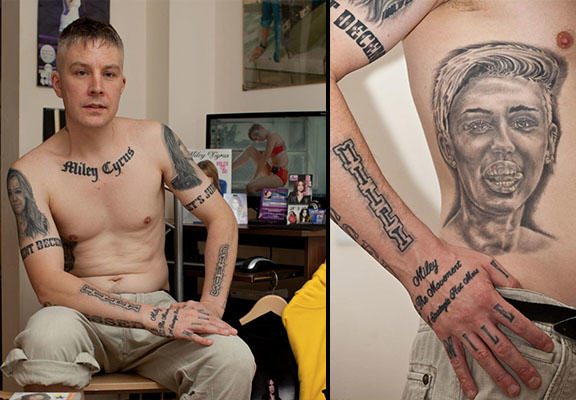 42-year-old Alan McCoid was arrested this morning after being suspected of making offensive remarks about social housing, black people and wrecking balls but was released after police realised he was just a twerp who was into Miley Cyrus.

“Having identified the suspect and seeing his prison-style rudimentary tattoos we naturally assumed that he was a Neo-Nazi hate-spreader,” claimed a police spokesperson. “But, once we had him in the cells and actually looked at the crude artwork we realised that, rather than being pictures of Hitler on his body, they were actually pictures of popstar Miley Cyrus.”

“Which is kinda worse,” he added.

Police claim that Mr. McCoid, despite looking like he’d smash an Asian family’s window for a laugh, would actually prefer to smash some moves to a bit of Bangerz on repeat.

“He’s actually just a slightly bewildered man, who for some unknown reason thinks that Miley Cyrus is worthy of fandom and pictures of her face are an appropriate tattoo for a grown man to have,” he continued. “We’re going to keep him in for questioning just in case.”