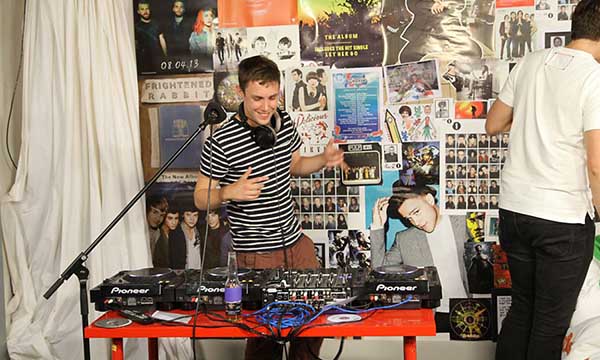 99% Of Dixon’s Clothes Handed Down By His Father

An up and coming bedroom DJ has revealed that he is happy with his surroundings and only ever intends to play his own house.

Andrew Brookes, also known as DJ Brooke Worm, insisted that playing his own house is the best way for him to reach his full potential as a DJ.

“I’m perfectly happy to continue to play my own house for the foreseeable future,” explained Brooke Worm earlier. “I’m only sixteen so I don’t really feel like there’s any pressure on me to play anywhere else, plus, the hospitality around here is really excellent, I’m always made to feel at home here and the artist liaison, my mum, always takes really good care of me.”

“I can have pretty much whatever I want on my rider,” continued Andrew. “Sometimes, I have to eat all of my dinner before I can have it but usually I’m just allowed whatever I want and I’m never, ever playing second fiddle to anyone else around her, it’s nothing but me all night long, seven days a week, it just doesn’t make sense to go anywhere else. The money’s not great, I get twenty-five quid a week, but it’s enough for me at the moment.”

The news has come as a shock to all of the DJ’s fans and family, more specifically his two younger brothers, who believe he has the ability to go all the way to the top of the music industry.

“I love listening to Andy play his music,” claimed twelve-year-old Simon. “Usually I’ll just sit and watch him play and try to learn from him, I’m hoping to be a DJ myself someday. There are sometimes that I wish he’d play outside the house though, like when I’m trying to do my homework or sleep but that’s all part of living with a DJ.”

“I hope he does play somewhere other than the house eventually,” concluded Andy. “I have my eye on his slot if I’m being honest with you.”