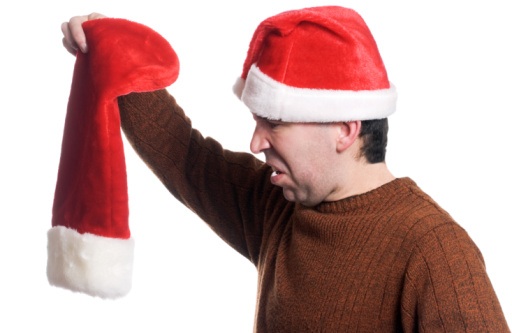 A bloke has reportedly been left empty handed for Christmas after accidentally leaving his “wanking sock” at the end of his bed.

Eighteen year old Gavin Steele claims to have made the catastrophic mistake after watching a late night episode of Loose Women while in bed on Christmas Eve.

“What a fuck up,” Steele told Wunderground earlier. “I’ve not got a single present and I’ve noone to blame but myself. I don’t know what happened, well I do actually, I cracked one out in bed and mixed up my Christmas sock with my wanking sock. No wonder father Christmas didn’t give me anything. That sock is fucking horrible.”

“Normally I don’t even wank at Christmas, I just feel really bad about it because it’s Jesus’s birthday and he’s just a baby so you shouldn’t really be doing it,” he bizarrely explained. “I shouldn’t have put Loose Women on. There’s something about that Coleen Nolan one, once I see her I just can’t help myself.”

According to reports, after spending an extended period of time in his bedroom, Mr Steele claimed to have had “the best Christmas ever”.