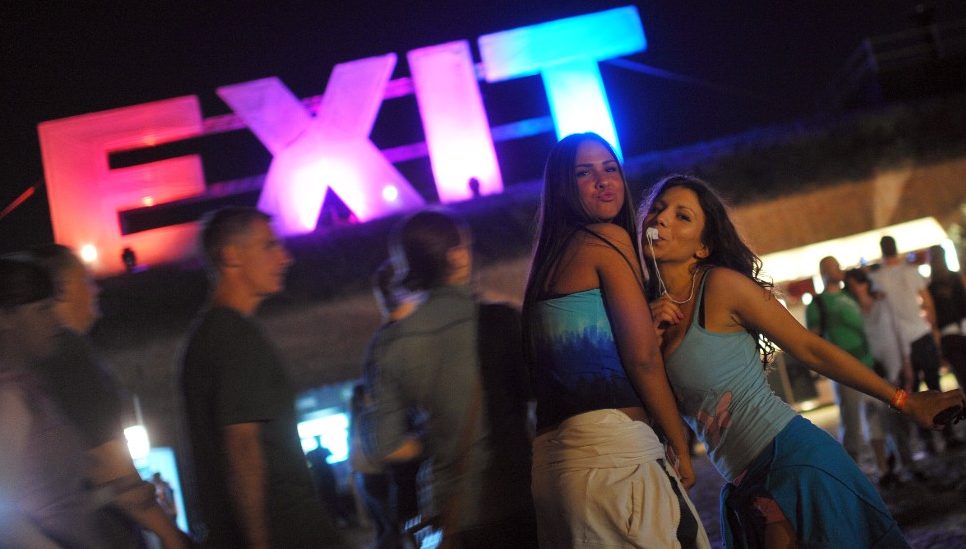 Hipster Pokes Out Own Eye With Sharp Edge Of Curled Moustache

Premier Serbian electronic music festival, Exit, have this week apologised for any confusion caused by the large sign above their main entrance.

Reports from last year’s festival claimed that some attendees had difficulty understanding that just because there was a massive sign saying Exit above the entrance to the festival it did not mean that the sign was in fact an exit.

“We’d just like to take this moment to tell those attendees from last year who experienced difficulty using the signs around the venue that we’re sorry for any distress caused and that we’re hoping to find a way to address the issue,” claimed EXIT festival spokesperson Jack Greene. “We’ve recruited the guy who designed the original neon exit signs and have had talks with Richie Hawtin’s team at ENTER in Ibiza to help solve the problem.”

“We had lots of issues with this last year,” continued Jack, “some people became trapped in the festival site after becoming unsure what constituted an entrance or an exit, while others were found constantly flitting around the threshold of the event, going in and out again, failing to grasp if they were entering or exiting Exit.”

According to stories from last year’s festival, which hosted some of the biggest names in dance music, several hundred people “never even managed to enter the festival, owing to the fact that they kept thinking that, seeing an exit sign, they were already somehow in the festival without knowing how they got in and just wandered around outside the perimeter looking for an entrance”.

“We found them, some days later, dressed in rags and filthy with their own bodily dirt. Their fingernails were millimetres longer and even the women had grown straggly beards,” explained Jack. “Some of their minds were medically ‘broken’ owing to the confusion they suffered, while others had begun to question the very nature of oppositional terms and experience profound spiritual and philosophical breakthroughs.”

Wunderground interviewed some of those people who experienced dramatic spiritual awakenings following the exit/entrance mix up – some of whom have become spiritual gurus owing to the epiphany that seeing something be two things at once caused.

“I am the alpha and the omega, down is up, black is white, life is death,” claimed former bank manager and now bedsheet wearer Clive “Neo” Nugent. “Won’t you join me here in the liminal, in the space between spaces where we’re all infinite. All things are in opposition and complimentary simultaneously, the yin and yang, house and techno, ones and twos, e’s and whizz! It’s all the same!”

Neo, which he insisted on being called, thanked Exit Festival for inadvertently revealing to him the fickle nature of the interplay between signs and signifiers, but claimed he wouldn’t be attending the festival again as “being something of a spiritual guru who wears tie dyed sarongs and doesn’t wash, my music preference has shifted into the psytrance spectrum.”

“Which, of course is the only musical genre that manages to be two at once and yet still be shit,” he added.

Exit Festival claim that for this year’s festival they will remedy the situation by ensuring that all hoardings featuring branding for the festival will contain the words “Exit Festival: This is not the exit” on them.

“We appreciate all the complaints and would especially like to apologise to those people who suffered complete mental breakdowns owing to the existential crisis that the entrance to Exit caused,” concluded a statement. “Try not to think so hard and literally next time.”