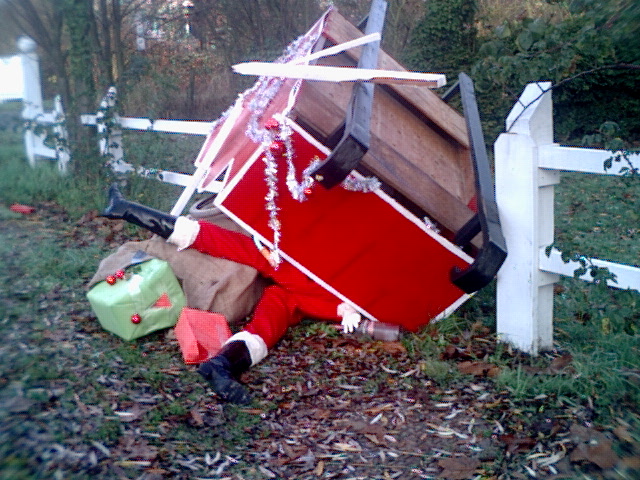 Number Of Pregnant Virgins At All Time Low This Christmas

A shadow of doubt has been cast over Christmas 2018 after Father Christmas reportedly crashed his sleigh on the way home from his annual delivery run as a result of “dipping into the reindeer ket”.

According to reports, the reindeer abandoned the sleigh wreckage somewhere in the South American Andes shortly before midday today, a full scale search and rescue operation has since been launched in a bid to bring the sleigh back to the North Pole.

Juan Valderrama, an Argentinian air traffic controller, spoke to Wunderground earlier, “Every year we track Santa’s progress while he is in South American air space,” he told us. “This is the very last call on his route and he usually drinks about ten thousand litres of brandy over the course of his deliveries so we just want to make sure he makes it home safely.”

“That lad can really handle his gargle,” continued Valderrama. “I’ve seen him do loop-da-loops after thirty six hours of driving, while drinking whiskey from a shoe, without spilling a single drop. He’s a proper pilot. You could tell there was something wrong with him this time, he was wobbling around all over the sky and eventually disappeared from radar somewhere around the border with Chile.”

Lead reindeer Rudolf also spoke to Wunderground, “What a fucking disaster,” he said angrily. “We’ve literally been prepairing all year for this trip, we’ve done the hard bit and we’re on the way home and that fat tosser decides he wants to start banging the ket. What a clown. If I had hands I would have slapped the cunt.”

“All he had to do was wait a few hours and we all could have got on the ket together in the comfort of the North Pole but, no, greedy chops had to have a sneaky sniff en route,” continued the reindeer. “You can’t fly a sleigh on reindeer ket, it’s twice as strong as the regular stuff. He crashed straight into the side of a mountain, we’re lucky no one was killed.”

So far, Father Christmas is yet to comment on the crash, sources close to him have confirmed that he is still “firmly in the grips of a severe ket hole”.