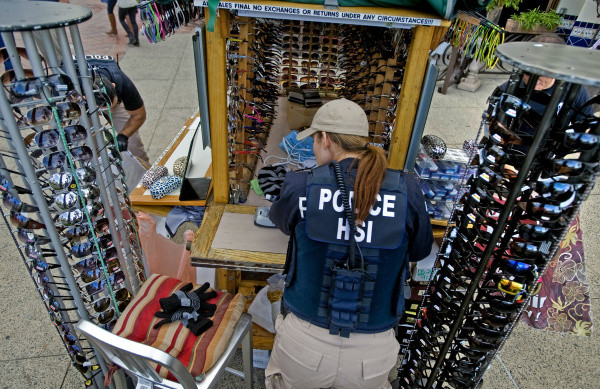 A major sunglasses dealing operation has been shut down in Belgium after the organisers of Ostend Beach Festival tipped of Belgian authorities about the whereabouts of a gang with six tons of awful sunglasses en route to the festival.

According to an official statement, there will be a “zero tolerance policy” on shitty sunglasses at this year’s festival.

Ostend Beach Festival, held on 7 & 8 July Klein Strand, Oostende, is the first European beach festival to actively clamp down on the wearing of awful sunglasses.

“We’ve seen some really godawful creations over the years. Honestly, think Elton John on crack and you’re not even close.”

“We’re just not willing to put up with it anymore so we decided this year was the time get proactive and tackle these gangs of sunglasses dealers head on.”

A police report has confirmed that a “substantial haul” of sunglasses was intercepted 10 kilometers east of the city Bruges.

“It’s clear these glasses were on route to Kleine Strand,” claimed one police officer.

“There isn’t much of a market for flashing LED sunglasses, sunglasses in the shape of boobs, oversized aviators or Bay Rans and Oatleys knockoffs outside of festivals, so they were definitely going to Ostend Beach Festival.”

“This really is one of the most awful hauls of sunglasses I’ve ever seen, and I’ve been working fashion police for almost twenty-five years.”

According to festival headliner, Claptone, awful sunglasses can be a real distraction for DJs and often lead to the atmosphere at festivals suffering.

“No one wants to see shitty glasses at a festival,” claimed the mysterious, bird-like man. “Plus, we’ve already got the likes of Felix da Housecat and Green Velvet on the lineup.”

“So we’ll have enough crappy sunglasses to deal with behind the decks without having to worry about them on the dancefloor too.”

If you would like the chance to party at one of Europe’s premier beach festivals, free from the dangers of awful sunglasses, click here for tickets and more information.