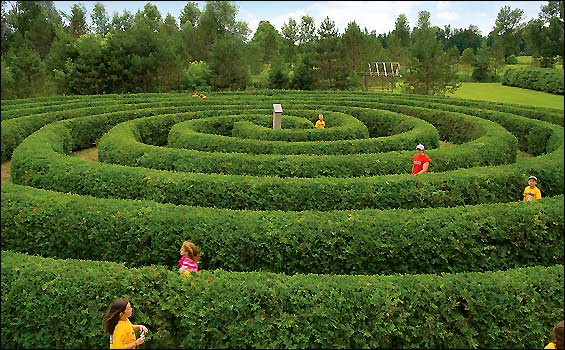 According to the organisers of Labyrinth Open, Croatia’s only festival to be set in an inescapable maze, the festival is practically impossible to leave.

Now in its second year, Labyrinth Open is going from strength to strength with headliners including Stephan Bodzin, Amelie Lens, Len Faki and Hernan Cattaneo set to take control of the music at this year’s festival.

“Last year was a great success for us,” explained Peter Janssens, the festival’s project manager. “We’re also expecting this year’s festival to be up to fifty percent bigger than last year’s. In fact, we’re sure it will be, half of the people who attended last year are still stuck in the Labyrinth.”

“We were planning on clearing them all out before the festival starts on 11 July but, to avoid a bit of PR disaster, we’ve decided to let them all stay on at this year’s festival completely free of charge,” continued Mr Janssens. “We guess they won’t mind giving up a year of their lives for the price of a ticket to such a great festival. If any of them kick up a fuss, we’ll bump them up to VIP and throw in some food vouchers. Everyone’s a winner.”

Mark Gaffney, a twenty four year old Englishman who attended last year’s festival and now lives somewhere in the Labyrinth’s northeastern quadrant, claims he will be happy to attend the festival and may even consider staying on another year.

“It’s fucking lovely in here mate,” Mark, who looked like a cross between Robinson Crusoe and an English football hooligan, told us earlier. “This quadrant is fairly quiet like, there’s only myself and about ten other Brits who were at the festival last year, we’ve decided to try and see out the whole Brexit thing here, apart from that we don’t really seem many people come through here at all.”

“To be honest, I stopped looking for a way out before the end of last summer. I’m quite happy living here.” admitted Gaffney. “I’ve not had to work, pay any rent or listen to my bird giving out to me and I’ve just heard I’m getting a free ticket to this year’s festival. So I’ll get to see Guy J, Hosh, Dubfire, Butch and Pan-Pot. What’s not to like? I could easily live here for another year, maybe even the rest of my life.”

Croatian officials have confirmed that no festival attendees will be permitted to stay in the country after this year’s festival and have instructed Labyrinth Open organisers to ensure the maze is clearly signposted to ensure an easy exit for all ticket holders.

If you would like the chance to lose yourself at this year’s Labyrinth Open, click here for ticket and more information.