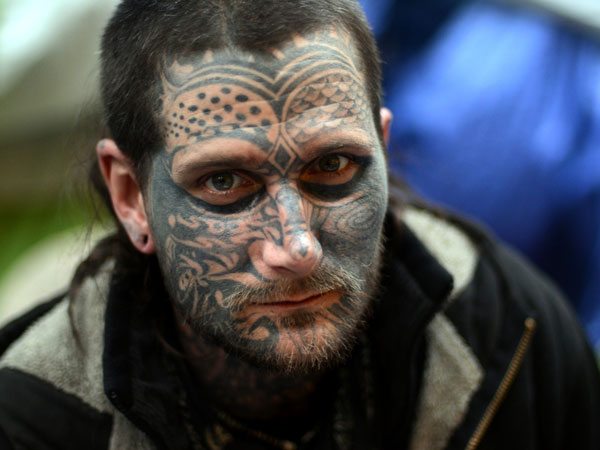 A man who recently got a facial tattoo has revealed that he still doesn’t regret his decision, eight days after having it done.

Pete Hampton, an unemployed twenty six year old, claims that getting his face tattooed was “one of the best decisions” he’s ever made.

“It’s fucking brilliant, the reason I got the face tattoo was because I really wanted to stand out from the crowd,” explained Mr Hampton earlier today. “So far, it’s really worked, everywhere I go people are constantly staring at me. I’m practically famous around my estate. So it’s been a big success as far as I’m concerned.”

“People have been asking me am I not worried that I won’t be able to get a job because of my tatts, but, to be honest with you, I really don’t care about that kind of thing,” revealed Hampton, who currently shares a squat with sixteen other people. “At the moment I’m just going to concentrate on my music so getting jobs and civilian stuff doesn’t really bother me.”

“Anyway, having a tattoo shouldn’t matter when you’re looking for a job, it’s the twenty first century for fuck sake,” claimed Hampton, who plays the bass in a band called Devil’s Piss. “If someone looks at me during an interview and all they see are the spider webs, tear drops and other interesting things I’ve got tattooed on my face, fuck them, I probably would have been really good at their job, as long a sit didn’t involve early starts, five day weeks or manual labor so it’s their loss.”

According to reports, four out of every five people who get their faces tattooed will regret having it done at some point in the future, with the other one in five people going on to enjoy successful careers as clowns.