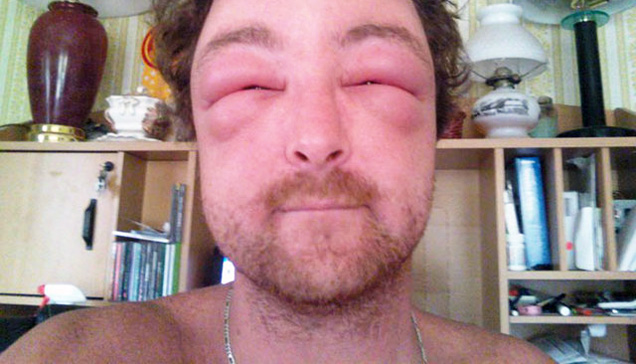 A man’s head has reportedly swollen to the size of a beach ball after suffering a severe allergic reaction to tech house.

James Swann, a thirty-three-year-old trance fan, believes he was exposed to the tech house while attending  a friend’s thirtieth birthday party last Saturday.

Mr Swann was hospitalised and treated for “extreme anaphylactic shock” and is currently in a stable condition, despite his head still being three times its normal size.

“I’m not used to that tech house shite,” he told Wunderground. “Normally, I only listen to very hard trance and I’d never usually go to any establishment that would even consider playing tech house but it was my buddy’s birthday so I had to show my face. I never expected something like this to happen.”

“As soon as I walked into the room I knew something was up,” continued Swann, through a mouth that looked like a small canyon on a model of the Moon. “Icould feel my collar tightening and I was getting really short of breath but it wasn’t until the DJ played a Camelphat Cola that my head started to swell up. It was the size of a beach ball by the end of the second verse.”

Hospital reports suggest that Mr Swan was treated with a mixture of antihistamine and Scot Project mixes before being discharged twenty-four-hours later.

“I’m feeling great now, the hospital staff were really brilliant and even though my head still looks a space hopper, I should make a full recovery,”

In unconfirmed reports, Nalin & Kane are believed to have approached Mr Swan in an attempt to get him to star, complete with beach ball sized head, in an official video for the 2019 edit of their timeless classic Beachball.