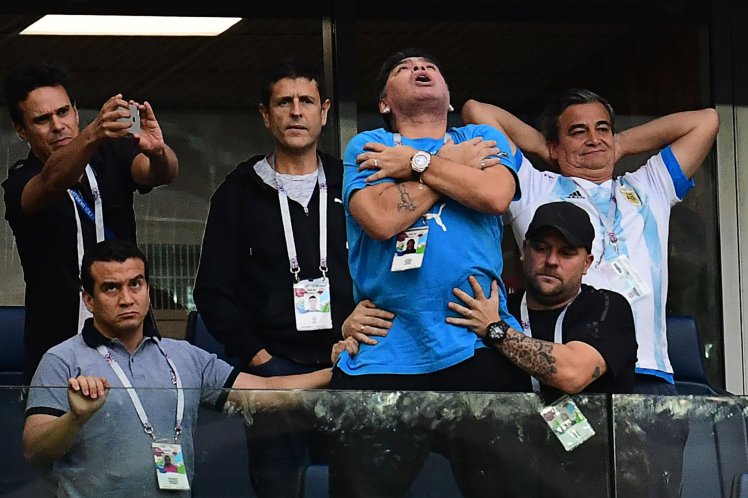 Footage of Argentinian legend, and arguably the greatest footballer of all time, Diego Maradona getting on it at Tuesday night’s match has been named as the clear highlight of the World Cup so far.

On the field, the game was full of drama, Leo Messi scored the one-hundredth goal of the tournament, only for Nigeria to equalise, before Argentina booked their place in the last sixteen with an eighty-sixth minute winner. However, it was Maradona’s reactions from his private box that stole the show.

“With a World Cup that has seen some real quality on the pitch overshadowed by some farcical referring through the use of VAR, it’s great to see some highlights coming from the stands,” explained former footballer and personal friend of Maradona, Paul Gascoigne. “Little Diego’s making this World Cup one of the best ever.”

“There’s obviously lots of lovely birds in the crowd too like, but, when Argentina are playing and Diego’s up in the boxes it really adds an extra element of entertainment to the game,” continued Gascoigne. “I heard he went a little too hard the other night and ended up in the hospital, bless, welcome to my world Diego, son.”

According to Pavel Mikhailov, one of Russia’s biggest cocaine dealers, the World Cup has been a complete success so far, with little or no trouble and lots of cocaine sales.

“These South Americans love this shit,” Pavel told Wunderground earlier. “The stuff we have here is like fucking baking soda to these people, probably because seventy percent of it is baking soda, so they can take so much of it. I’ve sold more coke here today than I did during the entire Sochi Winter Olympics and that was the biggest drugs fest this country has ever seen.”

“Maradona is obviously the hardest partier we’ve ever come across here,” continued the dealer. “I’ve had to send an entire team to follow the Argentinian team around the country just to cater for him, he’s single-handedly sending my kids to college. I wish we could have a World Cup every year.”

Maradona has since confirmed that he is fine after needing medical attention after the match, assuring fans they have nothing to worry about as it was “just a regular Tuesday night”.