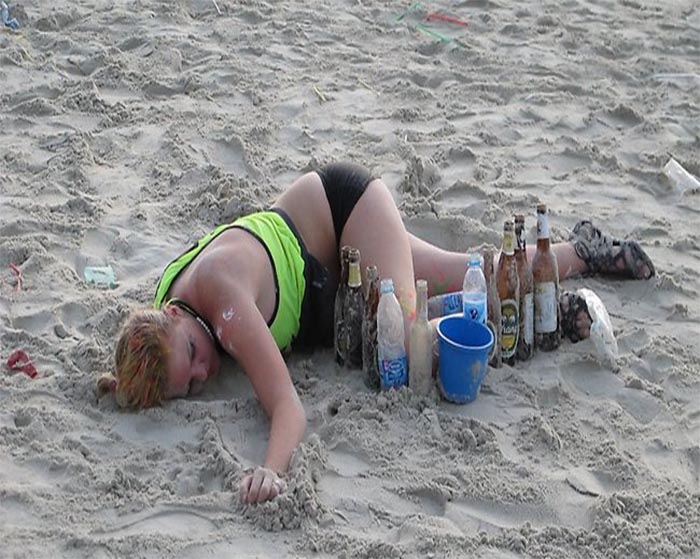 According to the World Wildlife Organisation, a fully mature, female raver has been found washed up on a beach in Thailand with over fifteen vodka and Red Bulls in her belly.

Reports of the beached raver, who was almost 1.6 meters long and weighed approximately 78 kilograms, were raised shortly after nine o’clock this morning, local time.

The raver, who appears to be of Western origin, is believed to have been on the beach for some time before being discovered by a local fisherman.

“She clearly wasn’t from around here,” claimed the local. “She was wearing a swimming suit and covered in neon paint and surrounded by empty buckets, Thai people would never let themselves be found like that, my guess is that she’s probably from Australia or England, it’s incredible to think she’s washed up here on a beach so far from home.”

Maria Klose, a spokesperson for the World Wildlife Organisation, claims that ravers are being found washed up all over South East Asia as a result of cheap booze and their hedonistic lifestyles.

“The raver’s’ natural habitat is changing,” Klose explained. “It used to be in Ibiza and other European destinations, where booze is pretty expensive and the average raver would have only had three or four drinks over the course of the night but, now, as we see ravers spreading to further flung destinations, they’re finding themselves exposed to all sorts of cheap gargle.”

“Just look at this poor sod, she has more than fifteen vodka and Red Bulls in her belly, that’s enough alcohol to kill a whole family of mice, it’s no wonder she’s found herself washed up on the beach,” she explained. “All a raver has to do is open their mouth near a full moon party in Thailand and they’re likely to have two or even three drinks poured into them. Something needs to be done to combat this, immediately.”

Reports that the raver found on the beach was dead have been proved wrong after a local boy poked her with a stick, to which the raver responded by farting, scratching her arse, standing up and mumbling something inaudible and eventually stumbling off in the direction of the nearest beach huts.