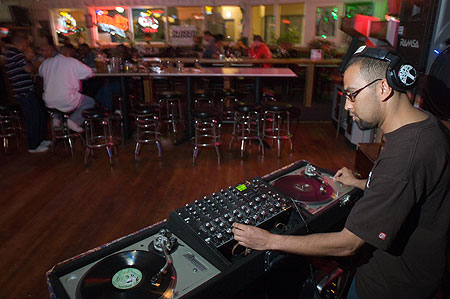 A shit DJ has reportedly just learned that the phrase “reading the crowd” has absolutely nothing to do with books.

Paul Henderson, aka DJ Wellhard, made the realisation during a heated exchange with a promoter following a disastrous DJ set.

“I’ve no interest in reading books or any of that nonsense,” continued Henderson. “I have a saying, ‘if it’s not on telly, it can fuck off’ and I live my life by it, it’s got me to where I am today so it’s been going alright for me so far. So, naturally, when I heard other DJs talking about reading crowds, I’d just kind of zone out and think about other things, like pizza or girls, or girls eating pizza.”

“It just never clicked with me that the crowd actually meant the crowd,” he explained. “I suppose it’s probably because I’ve never really had a crowd at any of my gigs. It was only today when that div promoter was having a go at me for playing one forty bpm at opening time that I finally got what it meant. Won’t make any difference to me though. I play what I want when I want.”

Promoter Ian Willis, also known as Willis.I.an, claims that he will never work with Henderson again after what he described as the “worst gig ever”.

“That’s easily the worst DJ I’ve ever had to deal with and I’m running a tech house night in Humberside so I deal with some pretty bad DJs,” Willis told us. “He thought ‘the crowd’ was a book and when I asked why he hadn’t read them he told me he didn’t read because they were for nonces. Honestly, I’m surprised he’s even managed to master breathing and kind of wish he hadn’t.”

According to reports, Mr Henderson was later kicked out of the nightclub after the DJ equipment suffered water damage when he tried to mix using sync, in the sink.