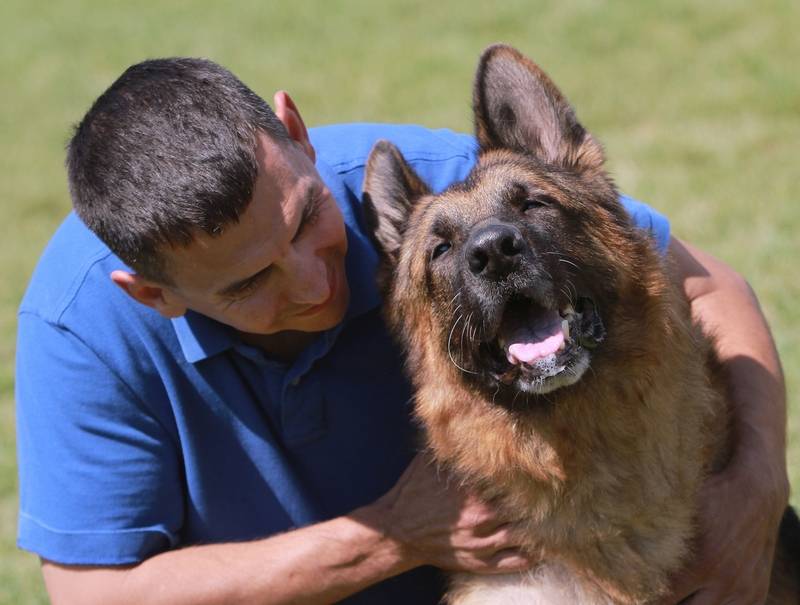 A retired police sniffer dog in England has reportedly been trained to sniff out rare vinyl by its DJ owner.

Rusty, an eleven-year-old German Shepherd, was adopted by Mark Wilson, an old school DJ from Kent.

“I’ve known Rusty for years now,” explained Wilson earlier. “We definitely don’t have the normal dog – owner relationship but I wouldn’t swap him for the world. How we met is actually kind of a funny story. Believe it or not, he busted me with half an ounce of weed at a music festival and, even though he totally ruined my day, I fell in love with him straight away and we stayed in contact ever since.”

“When I heard he was retiring a couple of years ago, I contacted the police straight away and asked if I could adopt him,” continued Wilson, owner of Back 2 Basics, Kent’s fifth most popular old-school club brand. “I had to jump through a few hoops because of my record, literally, they made me run through a dog training routine involving hoops, seesaws and tiny little hurdles, just to make a bit of a fool of me, but after everyone had a good laugh they agreed to let me have him.”

“He’s the best thing that’s ever happened to me,” he said with genuine joy on his face. “I’ve managed to train him to sniff out rare vinyl which, as an old-school DJ, is very important to me. Now, I just go around all the record fairs in Britain buying hidden gems for sweet fuck all, it’s amazing, I get all the records I need and I even get a few to sell on the side. I’ve made more in one year of selling classic records on eBay than I have in ten years of promoting.”

“He has other benefits too,” explained Wilson. “I haven’t lost any weed around the house since I’ve had him. He’s even found drugs in my house that I lost before I had him, two days after he moved in he sniffed out a bag of twenty pink elephants I lost in the 90s, they hadn’t even lost their whack. That turned out to be one of the best Tuesdays I’ve ever had.”

In related news, a parrot in Sweden has become the world’s first ever avian music critic after it’s owner noticed it said “Turn that shit off!” every time Swedish House Mafia came on the radio.