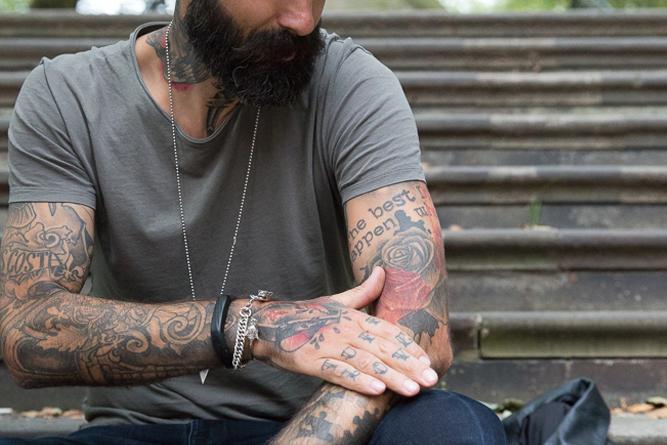 A tech house DJ is said to be considering his options after revealing that he is very close to running out of space on his body for his shit tattoo collection.

Max Weller, who currently has over two hundred shit tattoos, claims that he is looking at a number of solutions to his problem including skin grafts and a potential leg implant, which will see him have an extra leg attached to his body.

“After almost three years worth of DJing and tattoo collecting, I’m starting to run out of places to get my tattoos,” Weller told Wunderground this morning. “At the moment, I’ve got about three inches on my left leg, six inches on my back, half of my neck and most of my face.”

“I still have a few new tattoos that I really want to get,” continued Weller, who DJs under the name Maxed Out. “I’m gonna get a kebab on my leg, because I love kebabs, a dog pooping in my neighbour’s garden on my back and then just some random stuff on my face and neck, so once I get all of those, I’ll have literally no space left.”

“As a DJ, I think it’s really important to keep my tattoos ultra modern but I can’t do that if I’ve got no space left on my body to get them,” Weller stated. “So, I need to figure out a way of having more skin. I could get skin grafts, but I’d need to find a skin donor which is turning out to be a lot harder than I thought, people just don’t seem to be interested in giving their skin, even to a DJ.”

“I’ve also been looking at the option of having an extra arm or leg added,” he revealed “But, apparently, that’s not a thing, even though I’m fucking certain I’ve seen people with extra limbs before. For the time being, I think I’ll just get one of my thighs completely blackout and then get some cool new white tattoos on top of it, that should look awesome.”

According to experts, over half of all tattoos done in Britain are an attempt to make up for a lack of personality, however, none of them actually work, with most tattoo owners remaining boring personality vacuums after they have their tattoos done.