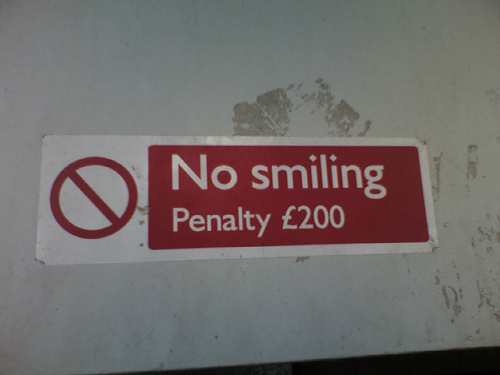 One of the world’s leading techno clubs has announced plans to ban all smiling on the dance floor by the end of the year.

The club, which is currently involved in an ongoing legal battle with a DJ they claimed “laughed during a set”, has asked to remain anonymous until the ban is in place.

A spokesperson for the club spoke to Wunderground earlier, “We see our club as one of the leading lights in world techno and we believe that as the scene progresses it will be one that is almost entirely free of any kind of smiles, laughter or visible signs of happiness.”

“Techno is definitely the most serious off all the electronic music genres,” continued the club employee. “Smiling on the dance floor is already frowned upon, although we actually consider showing any sign of emotion on the dancefloor as a weakness so we actually frown upon frowning too.”

“Now, we’re looking to take things to the next level and implement a full ban on smiling on the dancefloor,” continued Wunderground’s source. “We had hoped to ban smiling in the entire club but, apparently, banning an emotion is seen as some sort of a human rights violation, sounds a bit like health and safety gone mad if you ask me.”

“We will have designated smiling areas upstairs where we play children’s music, or house music as you probably know it, and people will be allowed to smile and laugh and joke up there, we’re expecting this area to be extremely quiet and mostly contain people who are just there to keep their friends happy and designated drivers.”

According to unconfirmed reports, one of the bookers at the club was rushed to hospital over the weekend after his chin became detached following a prolonged stroking incident in the backstage area.