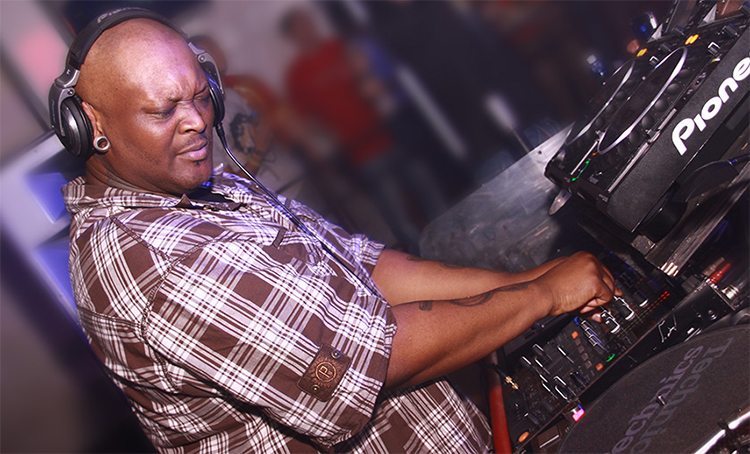 It has been sensationally revealed to Wunderground that all DJs are secretly receiving instructions through their headphones while they’re mixing.

Our source claims that a team of highly trained sound engineers in a secret underground bunker relay instructions through the headphones which tell the DJs exactly what to do at all times during their sets.

“No-one is actually a DJ,” explained whistle blower Ben Yorke, who claims he was recruited straight out a Music Technology course to work as a ‘puppeteer’ for some of the world’s most well known DJs like Maya Jane Coles, seen here receiving instructions to ‘twiddle the knobs a bit’. “There’s always someone like me on the other end of the headphone telling the DJ exactly what to do and when to do it.”

“Have you ever noticed when you hear a mistake during a set that the DJ will panic and quickly put an ear to the headphone?” continued Ben. “That’s them quickly getting instructions on how to fix the mistake.”

Ben explained that a typical set for him involves talking the DJ through how to use the mixing desk and reaffirming a promise of riches and fame if they “stay onside” with the conspiracy. “I’ll talk to the DJ once they put the headphones on and, like air traffic control, I’ll guide them safely through the set.”

“I might say something like speed up track 1 or adjust the bass,” explained Ben. “Or I’ll say do a fist bump here, adjust the mid on track 2, things like that.”

Ben said that things have rammed up in recent years to the point where puppeteers like him are telling DJs to interact with the crowd. “I actually invented the heart-hands gesture back in 05. I was guiding Armin Van Buuren through a set in New York when we first used it,” he explained.

“I always thought it was a bit meh, but I just wanted to see if he’d do it because I was quite bored with the set,” claimed Ben. “You’ll usually see DJs doing it because they’re playing quite boring EDM stuff and the puppeteer at the other end of the headphones has decided to just muck about by making them do stupid stuff like heart hands or blow kisses.”

“DJs are just pretty faces that a shadowy international conglomerate of dance music industry heads uses as stooges,” continued Ben who claims he is now in fear for his life. “They do it to keep dance music sounding the way they want it, the way that makes them money. If DJs started playing different genres or doing unsanctioned reggae mixes then those at the top wouldn’t be able to control everything.”

A terrified Ben said he doesn’t know who exactly is behind the conspiracy as he’s only ever met other puppeteers like himself who all used codenames and were contacted through a handler whose identity was also hidden, but that he suspects all the big companies are involved.

“This goes all the way to the top,” he cried. “Beatport, SFX, Native Instruments, they’re all in on it! They control all dance music and want to keep it that way by controlling what DJs play. The world needs to know!”

Ben says that he wants to blow the lid on it because he’s “become bored with dance music” and also because he feels that the shadow masters are starting to control too much of DJs lives, detailing how “all DJs who don’t use headphones have forgone independent thought and have had a microchip embedded into their heads that allows for a constant relay of instructions to be delivered to them about how to carry him or herself through every aspect of their lives.”

Before Ben had to be whisked to a safe house at an undisclosed location he warned all up and coming DJs to be extremely careful of what headphones they use and to play what they want to play, not what they’re told to.