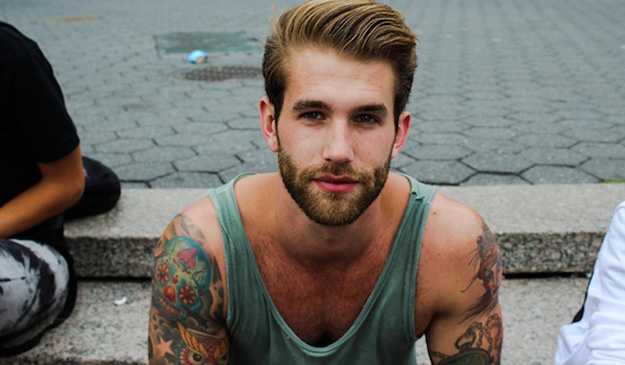 A DJ with an extensive collection of tattoos has shocked his fleet of fans by admitting that the majority of them actually mean fuck all.

Adam Johnson, aka DJ Jon Adamson, who claims to play “housey techno but not tech house”, revealed that his tattoos are simply a collection of pictures and words that he thought looked cool at the time.

“Honestly, there’s pretty much no meaning behind any of these tats,” he told us earlier today. “I don’t even know why I got most of them, I reckon there’s about thirty percent of them that I actually like and the rest of them are mistakes but that’s life isn’t it, you make a mistake, then you make about another seventeen or eighteen of them, and then you learn from them, kind of.”

“There’s a few that I can’t even remember getting because I was so smashed when I got them,” admitted the DJ. “At least that’s kind of a funny story to tell people but that’s about as interesting as these tats get. Oh, and the Chinesse writing on my chest that’s supposed to say ‘Hope’ actually says ‘noodle’, so I suppose that’s kind of interesting.”

“I was never really one of these guys that put a lot of thought into what I was getting put onto my body,” continued Johnson. “Most of them, I just went in with some money, looked through a book and picked something because I thought it looked cool or it was funny. I didn’t take into account that I wouldn’t always have the same sense of humour. I especially regret getting the word ‘cunt’ on my arm. I really should have seen that one coming.”

“The only thing I’ve got going for me now is that I’m a DJ, because I’d genuinely have fuck all chance of getting any other job with all of this shit plastered all over me.”