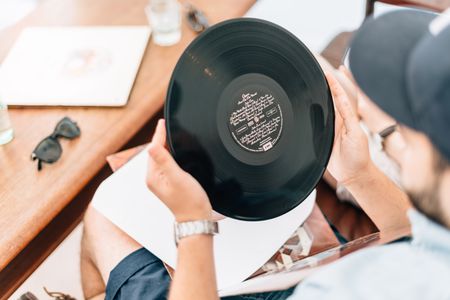 A fragile male DJ has bravely admitted that he finds seven-inch records ‘intimidating’.

Talking exclusively to Wunderground, Richard N. Vee claimed that even vinyl singles, boasting one inch more length than the average penis, prove to be emasculating.

Manspreading on his BMW 3 series custom leather seat, he continued. “Doing more coke than a champion greyhound gives us Big Dick Energy. In reality, though, it actually makes our dicks smaller.”

Just last week, Richard, who thought vinyl was only used for his Essex gaff’s luxury flooring, came across his first record. A seven inch single of Boney M’s Daddy Cool, revealing it sent “shivers down his spine”. Even more so when he realized “spine” was an anagram of “penis”.

“I’m used to playing my tech house tunes from a three-inch USB stick,” he whimpered. “But to hold all seven inches of that record in my hand – it made me feel a lot less big. I wanted the floor to open up and swallow me whole.”

It was at this point that we let Richard know about twelve-inch records, fittingly known as “long players”. After calling a time out on the interview to grab a glass of water and a brown paper bag, Richard, between deep breaths in through the nose, continued.

“I want to have integrity, and stick to digital-only sets,” he gasped. “The mixing is so easy it gives me a lot more time to peacock around the stage,” he added. “There’s nothing buzzier than testosterone.”

Although never using vinyl again, Richard, like all reputable DJs, still insists that his agent asks for a Technics 1210 set-up for every gig he plays.