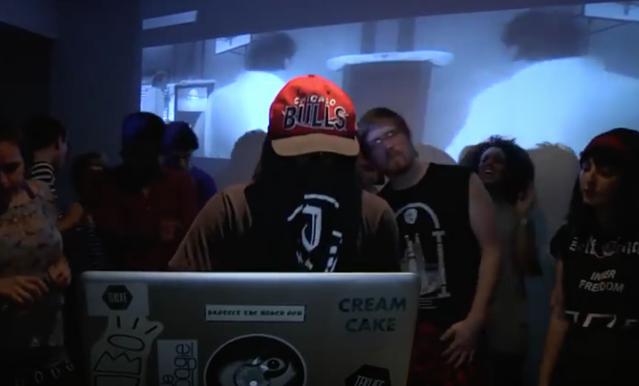 A weird bloke who seems to be lurking in the background of every photo of the DJ from a recent clubnight is actually the event’s promoter, it has emerged.

The promoter, Andy D’arcy, who possesses some strange “Gollum like” characteristics, can be seen loitering on his own in all of the photos, prompting the photographer to claim he “didn’t get one good shot” of the DJ.

“I was shooting for almost four hours and I can’t use a single one of the photos I got of the DJ,” camera owner Martin Harris told Wunderground this morning. “Every single photo has this creep in the background, getting his weird looking head, and sneaking his stupid fish face, into every single photo, I guess I’ll just have to crop him out of a couple and go with them.”

D’arcy, who likes to stay in the background during photos because the flash is too intense for his eyes, is believed to be delighted with how the photos turned out and excited to upload them to his Tinder profile.

“He’s had no luck with the online dating recently, or real life dating for that matter,” claimed one source close to the promoter. “I don’t think he’s seen the sun in about ten years, he sleeps all day and spends his nights in dark clubs, he looks like some sort of mix between a vampire and an earthworm, a little bit like one half of Right Said Fred, if they’d lived on nothing but lettuce and tapwater for their entire life.”

“I keep telling him he’d have a little bit more success on the dating front if he stopped being such a creep and lurking in the background all the time,” continued Wunderground’s source. “But he’s not having any of it, he just keeps saying stuff like he ‘wants to stay mysterious’ or if he ‘wanted to be famous [he’d] be a DJ not a promoter’, which is fair enough, I just wish he’d stop looking like he wants to eat people’s livers.”

According to reports, the DJ was extremely happy with how the photos turned out, having failed to notice anything apart from himself in any of the pictures.