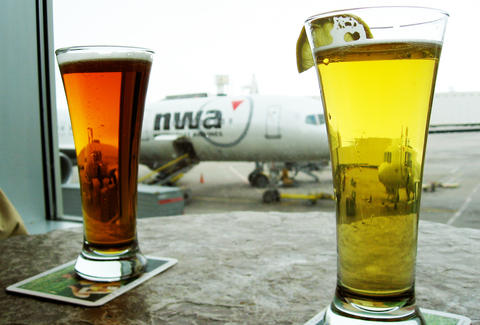 A scientist in Scotland is said to have “categorically proved” that airport pints significantly reduce the risk of a plane crash.

Conor Murphy, who claims to have developed a keen interest in science after receiving a science kit as a child, claims that drinking pints before flying has so far yielded a one hundred percent success rate in his research.

“I’m a scientist, sure I might not have any pieces of paper to say I’m a scientist but I’m a scientist nonetheless. Ask my mum, she’ll tell you. I’ve always been into slime and burning stuff and other sciencey things,” Murphy told Wunderground this morning. “So, now that I’ve got my credentials out of the way, I’d like to tell you a little bit more about my airport pints theory.”

“I’ve been flying two or three times a year now for quite some time, and so far I’ve never been on a plane that’s crashed,” he explained. “So, I’ve been wondering, what is it that I’ve been doing that has made these flights so successful, while other planes have been crashing all over the world, and as far as I can tell, the answer is drinking pints in the airport.”

“It’s the one thing that I’ve done the same for every flight, well there are pints and wearing my lucky pants but, to be honest with you, I don’t really believe in any of that superstition nonsense, I mostly wear the pants because they’re comfortable to fly in so I don’t think there’s they’ve had any effect on it.”

“So, I did some research and after talking to lots of my friends, it turns out that almost all of them drink pints in the airport before they go on flights too,” he continued, somehow with a straight face. “And guess what, none of them have ever been on a plane that’s crashed either. Now, that’s a bit too much of a coincidence to be a coincidence, the pints are definitely helping to keep the plane in the air.”

“When you think about it, it makes sense,” he said matter of factly. “Pints are full of bubbles and bubbles go up, so when you drink pints you’re full of bubbles and the bubbles keep going up. Then, you get on a plane and it goes up too, so the bubbles are in you and you’re in plane and everything is going up. It’s not rocket science, well it kind of is actually, but you get what I mean.”

Ryanair boss Michael O’Leary has spoken in support of Mr Murphy’s claims and insisted on opening bars that will serve beer with extra bubble at £20 per pint at all Ryanair boarding gates.